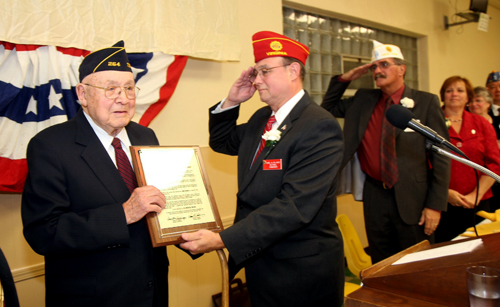 Speaking at a dinner at Stephen S. Sikora Post 1322 in North Tonawanda, Dellinger joined New York State American Legion Commander Kenneth Governor in presenting the Department Commander's Award of Excellence to Elmer B. Moje, a 100-year-old World War II army veteran who served in Africa and Europe. Moje lives on the family farm in Wheatfield, is a 66-year member of the Shawnee Volunteer Fire Co., and a 69-year member of Tonawanda American Legion Post 264.

The Vietnam War Army veteran said the Legion must continue to adapt to a changing world and a changing group of veterans. "Just as our country has evolved since 1776, we must continue to evolve," he said, to best serve "our veterans, our communities and our nation." He pointed to a "change in the air, a new culture of growth in membership."

Dellinger went on to note that the national organization was having every state-level Legion department formulate a five-year-and-beyond membership plan, along with re-focusing on the Legion's core mission to serve men and women in uniform, veterans, local communities and the nation.

Members of the Legion family struck by disaster over the past year received help from the Legion's National Emergency Fund, he said, including New York members affected by Hurricane Sandy.

"We have expended three-quarters of a million dollars in aid through the National Emergency Fund this year alone," he said, noting that his commander's project during his year in office is to raise $1 million for the emergency fund.