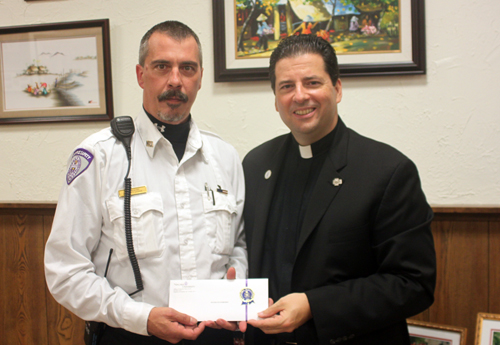 Peter Stansberry recognized as NU's Outstanding Employee of the Quarter

Stansberry joined Niagara as a temporary employee in 2006. He was promoted to his current supervisory role in March 2010.

One nomination of Stansberry referenced an incident when he was credited with saving a person's life.

"While on duty at 4:30 a.m. on May 4, 2012, Peter noticed that a vehicle struck the median on Lewiston Road in front of campus. Peter responded to the accident and learned that an occupant of the vehicle was having a heart attack. Peter administered emergency first aid, coordinated an ambulance response and transportation to the hospital. It was later learned that the occupant of the vehicle was an alumnus of NU. He believed that he likely would have died that night without Peter's assistance."

Of Stansberry's commitment to the university community, his supervisor said, "Peter consistently finds ways in which he can better serve the university, students, faculty, staff and visitors. He engages everyone he contacts with compassion and true caring for each person."

In describing Stansberry's work, his supervisor added, "Whether he is supervising security at a special event, responding to a serious incident, rendering aid to a member of the university community, or helping a student, Pete has a deep concern in his heart for the well-being of everyone on campus, especially the students."

Another nomination described Stansberry's Vincentian values: "Every day, Peter focuses on serving the NU community. He looks for opportunities to provide excellence in service with compassion and integrity."

Stansberry was also a recent recipient of a "Purple Pat," Niagara's new employee recognition program. The comment associated with the "pat" stated, "I am very appreciative of the excellent relationship you have with the residence life on-call staff. I appreciate the outstanding work you do to keep our campus healthy and safe late at night. You are student-centered and have their best interest always at heart."

Nominations for the Outstanding Employee Award are made by NU employees, students, alumni, parents, or other persons who come in contact with NU employees. Honorees are eligible to receive gift certificates to area amenities, movie passes, two days off during the next quarter, NU athletics tickets and a universal parking tag that can be used in any non-handicapped parking spot on campus.