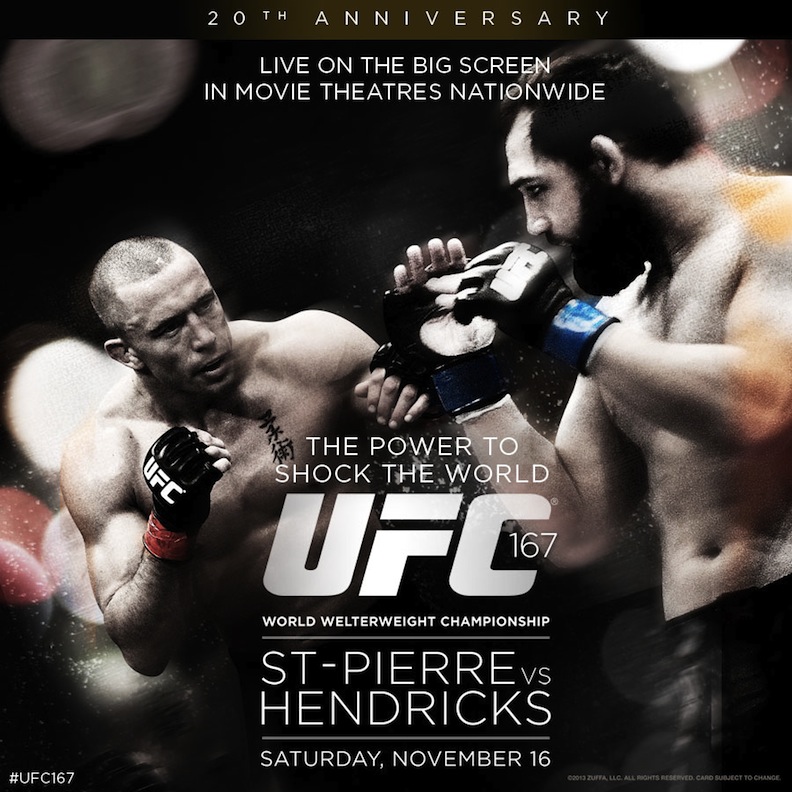 The Ultimate Fighting Championship returns to movie theaters nationwide on Saturday, Nov. 16, at 10 p.m. ET, as NCM Fathom Events and UFC bring UFC 167: St-Pierre vs. Hendricks to the big screen.

Fight fans will get a front-row view of all the pulse-pounding action when longest-reigning champion in the UFC, welterweight king Georges "Rush" St-Pierre (also known as "GSP"), returns to the Octagon to face No. 1 contender Johny "Bigg Rigg" Hendricks. GSP will take on his most dangerous challenger to date in the sledge-hammer-handed Hendricks. Broadcast live from the MGM Grand Garden Arena in Las Vegas, audiences will witness all the excitement as the undisputed champion in the UFC welterweight division is determined during the UFC's 20th anniversary event.

Tickets for UFC 167: St-Pierre vs. Hendricks are available at participating theater box offices and online at www.FathomEvents.com. The event will be presented in more than 350 select movie theaters around the country through NCM's exclusive Digital Broadcast Network. For a complete list of theater locations and prices, visit the NCM Fathom Events website.

UFC 167: St-Pierre vs. Hendricks will be presented in the following local movie theaters:

"UFC fans will want to experience GSP and Hendricks go head-to-head in UFC 167 on the big screen," said Dan Diamond, senior vice president of NCM Fathom Events. "Audiences will feel like they have a ringside seat with every move these fighters make. The only way to get closer to the action would be to get in the Octagon."

The hard-hitting Hendricks (15-1), fighting out of Dallas, is the top-ranked challenger in the 170-pound division. He earned his shot at GSP by putting together a six-fight unbeaten streak in the UFC. A two-time NCAA Division I wrestling champion with one-punch knockout power, "Bigg Rigg" is set on derailing St-Pierre's march to the Hall of Fame. He is known for his extensive wrestling background and powerful punches, particularly from the left hand, which has earned him three "Knockout of the Night" bonuses and one "Fight of the Night" award.

The old school will also meet the new breed at UFC 167, as the resurgent "Ruthless" Robbie Lawler meets Canada's Rory MacDonald. After returning to the UFC in 2013 following a more than eight-year absence, Lawler has looked better than ever in knocking out Koscheck and Bobby Voelker. The 24-year-old MacDonald is currently sporting a five-fight winning streak that includes wins over Penn and Jake Ellenberger, but he has yet to face someone with the power of Iowa's Lawler, making this a must-see welterweight battle.