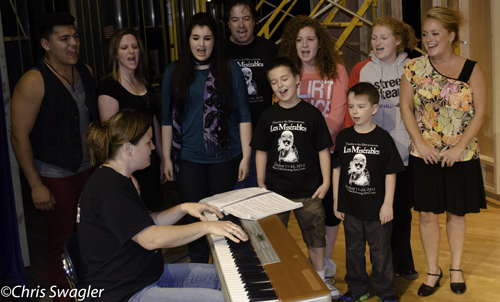 'Les Mis' is the people's show

The last time 12-year-old Samuel Fesmire trod the boards it was as part of the large von Trapp family at Artpark's production of "Sound of Music" this past summer.

He's on stage again in the Theatre in the Mist's upcoming production of "Les Misérables," but this time he's providing his own family - his brother, Isaac, 8, and his dad, Eric Fesmire.

The former Sanborn residents are juggling a move to North Tonawanda last week, as well as work and school schedules, in order to make rehearsals for the Oct. 11 to 26 production at the Niagara Falls High School Performing Arts Center. However, they and the rest of the family seem to be thriving under the pressure.

They are just a few of the Niagara-Wheatfield-area residents acting in "Les Mis" and one of several family groups.

Samuel, whose theater credits also include Theatre in the Mist's "Seussical the Musical" (Cadet) and "A Christmas Carol" (Young Scrooge/Tiny Tim) is certainly enjoying it.

"It's kind of interesting going from one of the more important roles (Kurt) in 'Sound of Music' at Artpark to a member of the ensemble," he said, but added, "It's fun acting like the guy who is desperate instead of the sweet little kid. ... It's really fun trying to see how many different people you can be."

Seeing how much fun his older brother was having prompted Issac to also try out for "Les Mis."

"I've never been in a play before, and my brother's been doing awesome," he said.

Eric Fesmire views their involvement in "Les Mis" as "a chance to do something together" with two of his sons, and adds that his youngest also is "starting to get the itch."

This is the first time members of the family have been on stage together. Eric, who hasn't acted for 10 years, used to be part of a Christian theater group. Technically, he was on stage with Samuel in one of that group's productions, but Samuel was only 4 months old and "was just there to be a baby and look cute."

Eric plays several roles, including Montparnasse in Thernardier's gang, the factory foreman and a constable.

"Les Mis" is more of an adult story, but Eric believes "the heart of the story is good for all ages." Some of the actions in the play are a little deep for youngsters, such as suicide, but Eric and his sons discuss these questions in the car on the way home from rehearsals.

"It gives you a chance to talk about it, and explain what's going on ... it's a teaching time with them," he said.

Others with Niagara-Wheatfield area connections involved in the "Les Mis" production are:

•Music director is Marnie Williams Aldrow, who teaches voice and piano in Niagara County and has been musical director or pit keyboardist for many productions with Theatre in the Mist, The Palace Theatre, and Niagara-Wheatfield and Tonawanda high schools.

•Andrea Sarles-Letcher is in the lovely lady ensemble. She is a Spanish teacher for Niagara-Wheatfield schools.

•Jenna Montesanti, a senior at Niagara-Wheatfield High School, is the lead factory girl.

•Katie Junevic-Bolden, a Niagara-Wheatfield graduate, is a lovely lady and a factory girl.

•Kacy Carbone is in the ensemble.