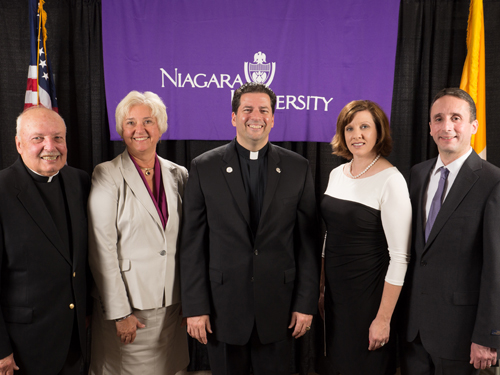 The event, which takes place during the university's celebration of Vincentian Heritage Week, recognizes the extraordinary contributions of university employees, alumni and community leaders.

Craig J., Ph.D., and Lisa (Wasson) Rivera, '95, M.S.Ed.'97, were presented with the Vincentian Mission Award, which is given to members of the university community who seek to emulate the altruistic spirit of St. Vincent, the universal patron of charity. The couple has hosted as many as 50 students in their home as part of the "Niagara Plunge," a program that immerses freshmen in the university's Catholic and Vincentian mission. The Riveras are also active with the Heart, Love and Soul food pantry in downtown Niagara Falls, and the university's Alumni Chapel Community.

Craig attained his B.S. from Penn State University, and both his M.A and Ph.D. from SUNY Albany. He started working at Niagara as an assistant professor of criminal justice in 2002, and was named an associate professor in 2008. He received the university's Excellence in Teaching Award in March 2009. When he's not teaching, Craig leads fundraising efforts for Peaceprints Prison Ministries, an organization that assists those transitioning from prison.

The Rev. John S. Sledziona, C.M., received an honorary Doctor of Humane Letters for his faithful service to Niagara University, the Congregation of the Mission and the Catholic Church. Sledziona has worked as a priest, prep school rector, high school principal, vocation director and provincial superior. Born in Derby, Conn., Sledziona was ordained as a Vincentian priest in May 1970. He was elected provincial of Vincentian fathers of the New England Province in 1996. Six years later, the superior general of the Vincentian Fathers in Rome appointed him president of the National Conference of Provincials in the U.S. Sledziona served as a NU trustee from 2006-13, before stepping down to serve in his new position as cabinet secretary for Ordained Ministry and Liturgical Worship at the Diocese of Manchester, N.H.

Dr. Judith A. (Skurski) Willard, '70, M.A.'72, was presented with Niagara's Caritas Medal, which is awarded to contemporary leaders who exemplify St. Vincent de Paul's charity in an extraordinary way. Willard's career at Niagara began in 1966 when she was a freshman working in the Office of Financial Aid. From 1970 to 1986, she served as associate director of financial aid, director of financial aid and associate vice president for enrollment services. In March 1986, Willard was appointed to the new position of vice president for student advisement services, making her the first female vice president in the university's then-130-year history. She was named NU's assistant to the president for planning in 1993, the position she serves in today. The 1995 Medal of Honor recipient has overseen several capital improvements on campus, including the recent, $80 million "Promise of Niagara" campaign. Willard's 47-year career at Niagara University will conclude when she retires on Oct. 31.