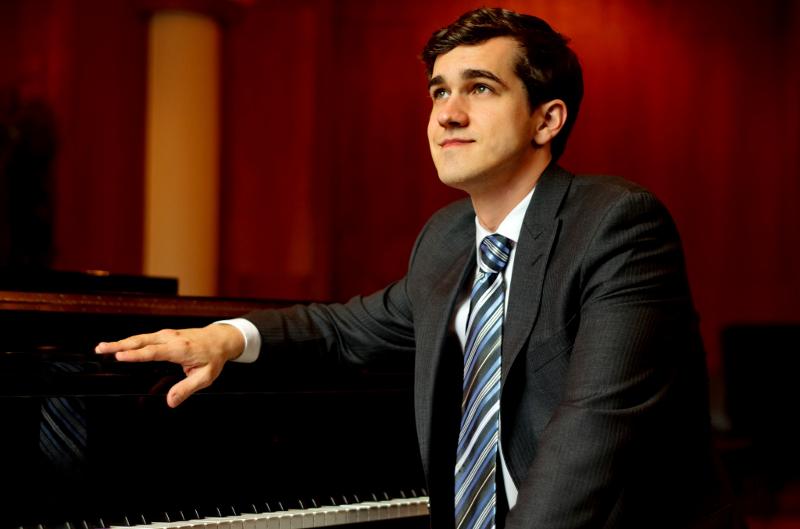 Eastman School of Music doctoral candidate and pianist Cahill Smith will make a stop at Kleinhans on the road to his Carnegie Hall debut.

Smith, the inaugural recipient of the Eastman School of Music's Lowry Award, will perform a free recital of the works of composer Nikolai Medtner at 2:30 p.m. Sunday, Sept. 29, in the Mary Seaton Room at Kleinhans Music Hall, 3 Symphony Circle, Buffalo. He will repeat this recital in Carnegie Hall's Weill Recital Hall on Oct. 27.

The recital is presented through the generosity of a Buffalo Philharmonic Orchestra donor as a way of thanking the community for its support as the orchestra begins a new season. The community is invited to attend free of charge and watch a young pianist highlight a composer whose works are often overlooked. Parking will be free, and a cake-and-punch reception will follow the recital.

The Lowry Award will allow one doctoral candidate at Eastman to present a program in Carnegie Hall's Weill Recital Hall in the fall and spring semesters. The candidate is chosen by a faculty committee based on level of performance and creativity of a solo or collaborative project presented as part of his or her doctoral degree requirements.

Medtner lived from 1880 to 1951 and featured the piano in every work he composed. It was a tumultuous time in classical music, yet Medtner eschewed modernism in favor of romanticism. He has been characterized as a thoughtful composer whose focus was on the expression of ideas through music. Luminaries such as Sergey Rachmaninoff and Alexander Glazunov praised him as an important composer and as a guardian of art, and his works were reviewed warmly during his lifetime. However, they were seen by a public hungry for modernist works as being backward-thinking, and Medtner has yet to gain widespread public adoration. This recital marks the first survey of Medtner's works since 1930, and one of the pieces on the program has never been recorded for commercial release.

Although the event is free, a reservation is required. Anyone wishing to attend should call 716-242-7824.