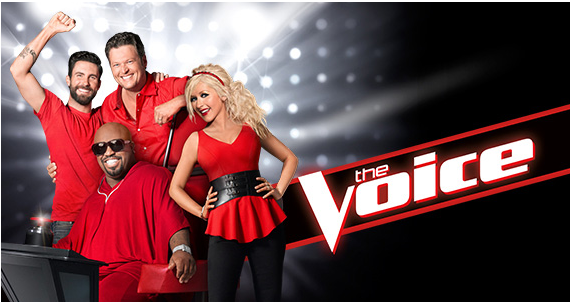 NBC's "The Voice" coaches have chosen multi-platinum singer-songwriters as their respective advisers for the upcoming fifth season. Cher is set to work alongside coach Blake Shelton, Ed Sheeran will join forces with coach Christina Aguilera, Ryan Tedder will work with coach Adam Levine, and Miguel will team with coach CeeLo Green.

Aguilera (@xtina), Levine (@adamlevine), Green (@ceelogreen) and Shelton (@blakeshelton) represent a reunification of the original "Voice" coaches who appeared on the series for its first three seasons. Carson Daly (@carsondaly) once again returns as host.

"The Voice" was last season's No. 1 unscripted series in adults 18-49, averaging a 5.2 rating with its Monday edition. That marked the first time in 10 years any series had topped Fox's "American Idol" for that distinction. The June 18 "Voice" finale attracted the biggest overall audience (15.6 million viewers) to date for a "Voice" season-ender.

The announcement was made by Paul Telegdy, president of late night and alternative programming for NBC Entertainment.

"This group of wildly successful musicians will add their distinctive talents to their respective teams," he said. "I know Christina, Adam, CeeLo and Blake are very much looking forward to having them come aboard."

Cher (@cher) is a winner of an Oscar ("Moonstruck"), Emmy ("Cher: The Farewell Tour"), Grammy ("Believe") and three Golden Globes ("The Sonny & Cher Comedy Hour," "Silkwood," "Moonstruck"), She has been an entertainment icon for nearly 50 years, and is the only artist to have a No. 1 single on the Billboard pop charts in each of the past six decades. Her l998 single, "Believe," reached No. 1 worldwide, selling more than 30 million units. Her 325-show "Living Proof" tour (2003-05) played to more than 3 million fans and is the most successful tour by any female artist.

Her current single, "Woman's World," was No. 1 on Billboard's Dance Club Play Charts and her new album, "Closer to the Truth," which was her first in more than a decade, is scheduled to be released on Sept. 24. Cher will also perform Sept. 23 on NBC's "Today" show.

Masterfully blending soulful vocals with organic folk introspection and irresistible hip-hop hooks, British native Sheeran (@edsheeran) is a genuine global phenomenon. The 22-year-old's breakthrough debut album "+" features the worldwide smash "The A-Team," which has also been certified two-times platinum in the U.S. and was nominated for Song of the Year at the most recent Grammy Awards.

His ever-growing stateside fan base has resulted in back-to-back sold-out headlining tours of North America and he is currently hitting arenas and stadiums around the country as main support on Taylor Swift's North American "Red" Tour. Sheeran recently announced a pair of fall headlining shows at New York City's famed Madison Square Garden, which both sold out in a matter of minutes.

Tedder (@onerepublic) is the founder of superband OneRepublic and producer of artists such as Adele, Beyoncé, Leona Lewis, Maroon 5 and Carrie Underwood. He has sold more than 130 million records worldwide and has held more than 75 No. 1 chart positions across the globe. The six-time Grammy nominee took home his first award for Album of the Year at the 2012 Grammys for his two songs on Adele's "21."

OneRepublic took the world by storm in 2007 with their debut release "Dreaming Out Loud." The album included the smash single "Apologize," which shattered digital sales and airplay records worldwide. The band's sophomore album, 2009's "Waking Up," produced three singles: "All the Right Moves," "Secrets," and "Good Life." OneRepublic released their third studio album, "Native," on March 26 and the disc includes the singles "If I Lose Myself," "Feel Again" and "Counting Stars."

Miguel (@MiguelUnlimited) hit the mainstream in 2010 with the infectious first single "All I Want Is You" from his major label debut album of the same name. The album also features "Sure Thing," which hit No. 1 on Billboard's Hip-Hop/R&B chart and second No. 1 single "Quickie."

Miguel followed up on the success of his debut album with his critically acclaimed, Grammy-nominated sophomore release, "Kaleidoscope Dream," which features his third U.S. No. 1 hit single "Adorn." The single garnered Miguel his first Grammy for best R&B song and resided at the No. 1 spot on the R&B/Hip-Hip Airplay chart for more than 23 weeks. He has been nominated for five Grammys. In April, Miguel was the musical guest on "Saturday Night Live" and was also included as one of Time magazine's 100 Most Influential People.

The innovative format of "The Voice" features four stages of competition: the first begins with the blind auditions, then "The Battle Rounds," "The Knockout Rounds," and finally, the live performance shows.

During the blind auditions, the decisions from the musician coaches are based solely on voice and not on looks. The coaches hear the artists perform, but they don't get to see them - thanks to rotating chairs. If a coach is impressed by the artist's voice, he/she pushes a button to select the artist for his/her team. At this point, the coach's chair will swivel so that he/she can face the artist he/she has selected. If more than one coach pushes his/her button, the power then shifts to the artists to choose which coach they want to work with. If no coach pushes his/her button, the artist is eliminated from the competition.

Once the teams are set, the battle is on. Coaches will dedicate themselves to developing their team of artists, giving them advice, and sharing the secrets of their success, along with help from their celebrity advisers. During "The Battle Rounds," the coaches will pit two of their own team members against each other to sing the same song together in front of a studio audience.

After the vocal battle, the coach must choose which of his/her singers will advance to the next round of competition, while the losing artist is available to be stolen by another coach. Each coach has two steals available during "The Battle Rounds."

At the end of the battles, only the strongest members of each coach's roster remain and proceed to "The Knockout Rounds." The artists will be paired again with a member of their own teams, but this time they find out only minutes before performing with whom they are competing. The artists each select their own songs to perform individually, while their direct competitor watches and waits. They are vying for their coach's confidence and decision to take them to the live shows. Their coach will choose the winner, and the artist not selected will be sent home.

In the final live performance phase of the competition, the top artists from each team will compete each week against each other during a live broadcast. The television audience will vote to save their favorite artists, and the two artists with the lowest number of votes will be sent home each week. In the end, one will be named "The Voice" and will receive the grand prize of a recording contract.