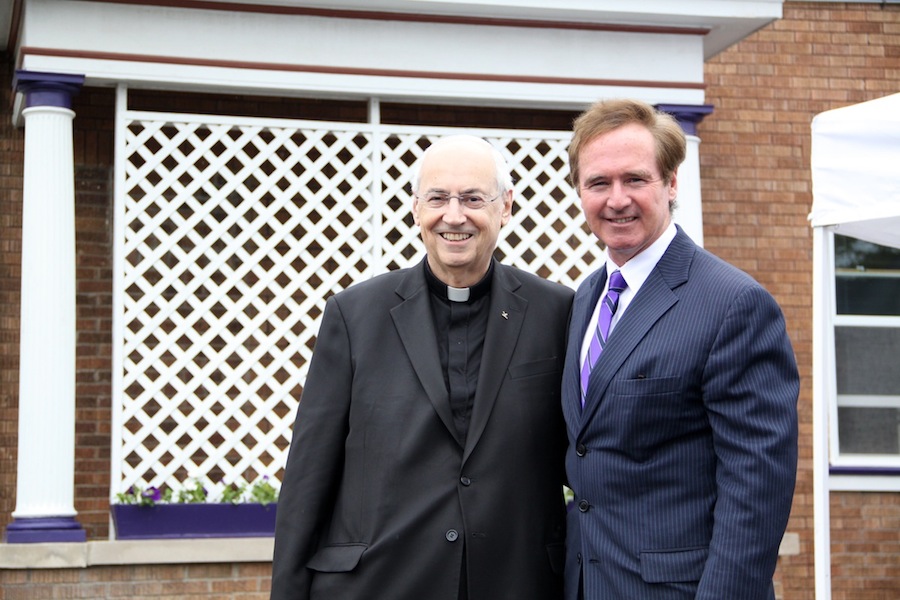 ReNU Niagara is moving its offices downtown - and the institute that oversees the community-minded program has a new name.

Those were the announcements made during a press conference held Monday at ReNU Niagara's new location on the corner of Main Street and Park Place in Niagara Falls.

Since being established by Niagara University in 2006, ReNU Niagara has completed projects addressing urgent community needs and challenges, including the GreenRoots Leadership Development program and the Creating A Healthier Niagara Falls program, which is funded by the John R. Oishei Foundation. Additional ReNU initiatives include the planting of community vegetable gardens, tax preparation assistance, resident and organizational training, and GIS asset mapping.

ReNU Niagara's move downtown is intended to further the university's presence in Niagara Falls and to strengthen and enhance the growing number of initiatives aimed at revitalizing the downtown core and its surrounding neighborhoods.

"My colleagues from Niagara University and I have long waited for this day and this event, to have a special place where we could emblazon our name on a building right here on Main Street in Niagara Falls," said the Rev. Joseph L. Levesque, C.M., NU president. "We invite residents to come in and talk with us about how we can work together for a better Niagara Falls, to improve our neighborhoods, to find justice for those who need it most, to build up a community that is important to this region. In short, justice for all is what we seek."

"The vision for ReNU going forward is to keep doing what we have been successful in: working collaboratively with our community partners that we have built such great relationships with since 2006 to address needs and to fill in gaps to allow the neighborhoods to grow and thrive. We recognize and believe that, in order to revitalize the City of Niagara Falls as a whole, the downtown core needs to be stabilized and successful. We look forward to being here to see it happen."

"Today I have the great pleasure of announcing that the Niagara University Board of Trustees is honoring Father Levesque's commitment to community service in a very special way," said Mary Borgognoni, Niagara's interim vice president for institutional advancement. "From this day forward, the Institute for Civic Engagement will be known as the Rev. Joseph L. Levesque, C.M., Institute for Civic Engagement."

Borgognoni also announced that the university is pursuing a $1 million endowment to sustain the institute, with more than $200,000 already pledged to the cause.

"This place, in so many ways, represents our aspirations for downtown Niagara Falls," said Dyster, a member of the university's board of advisers. "What a fantastic symbol to have this office located in such a prominent location. I look at this as the beginning of a great new partnership between Niagara University and the City of Niagara Falls."

Higgins, whose office is located in the same building as ReNU Niagara's new headquarters, agreed with Dyster.

"Universities play a very unique and critical role in our communities," he said. "Not only are they responsible for educating and teaching students, but they also are tasked with engaging them in partnerships that move the community forward."

"It will be great to coexist in this facility with staff members from ReNU Niagara," Higgins added. "The mission of Niagara University under Father Levesque is not changing, and that mission will be felt in this area for years to come."

For more information, contact Dr. David Taylor, executive director of the institute, at 716-205-0074 or [email protected].