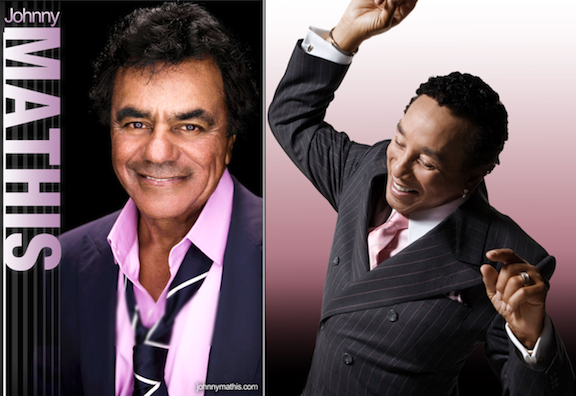 Two of America's timeless singers - Smokey Robinson and Johnny Mathis - join the Seneca Casinos' "Summer Rush" lineup with performances that will match the thrill of summertime. Both will travel to the Seneca Niagara Events Center in Niagara Falls this summer.

Motown's first No. 1 R&B hit, "Shop Around" by The Miracles, was sung by the group's founder and lead singer, Smokey Robinson. More than 50 years later, Robinson continues to grace the stage with impeccable vocals and energy, and will perform live at Seneca Niagara Events Center on Saturday, July 26, at 8 p.m. He penned dozens of hits with The Miracles ("You've Really Got a Hold on Me," "Ooo Baby Baby," "Tears of a Clown," "I Second That Emotion" and more), for other Motown greats ("The Way You Do the Things You Do," "My Girl," "Get Ready" and more) and for his own solo career, which began in 1973 ("Just to See Her," "Cruisin'" and more). Robinson is a member of the Rock and Roll Hall of Fame and the Songwriter's Hall of Fame, a Kennedy Center honoree and a Grammy Living Legend Award winner.

The smooth vocals of Johnny Mathis return to Western New York during an unforgettable performance on Saturday, Aug. 24, at 8 p.m. at Seneca Niagara Events Center. Mathis is a 2003 Lifetime Achievement Grammy winner and wrote the No. 1 hits "Chances Are" and "Too Much, Too Little, Too Late." Many of his other songs - such as "It's Not for Me to Say," "Misty" and dozens of holiday ballads - continue to resonate with audiences young and old. Two interesting facts about Mathis: 1.) His LP album "Johnny's Greatest Hits" in 1958 spent an unprecedented 491 consecutive weeks through 1967 on the Billboard Top 100 album charts, which is noted in the "Guinness Book of World Records." 2.) He passed up an opportunity in 1956 to try out for the U.S. Olympics as a high-jumper; instead, he signed his first recording contract with Columbia Records.

Tickets for both the Robinson and Mathis concerts start at $45 and are on sale now. Tickets for these and all other upcoming shows are available at Seneca Casino box offices, www.Ticketmaster.com, all Ticketmaster locations, or by phone at 1-800-745-3000.

In addition, a host of new musical acts - ranging in genre from alternative rock to R&B to classic pop - are booked for the 440-seat Bear's Den Showroom this summer. Additions to the July and August lineup include: soulful R&B singer-songwriter Will Downing; Las Vegas-based hit tribute show Jay White as Neil Diamond; Grammy Award-winning guitar virtuoso Larry Carlton; 1990s alternative-rock band Candlebox, and; "Oh What a Night!" - A Musical Tribute to Frankie Valli and The Four Seasons, directed by award-winning producer-director Michael Chapman.