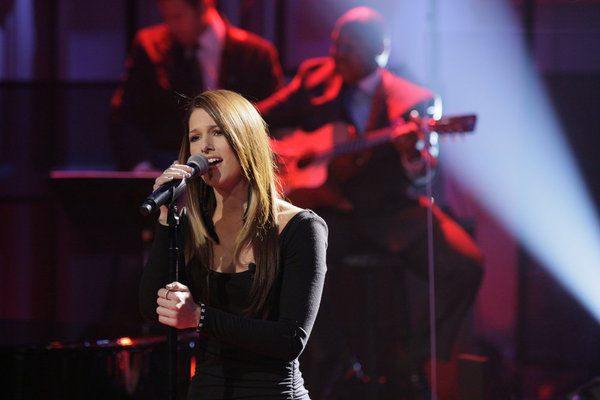 Cassadee Pope is shown performing on "The Tonight Show with Jay Leno." Pope, who won season three of "The Voice," will return to the show next week to perform her new single "Wasting All These Tears." (NBC photo by Paul Drinkwater; second photo also courtesy of NBC)

Cassadee Pope returns to 'The Voice' with live performance June 4

Cassadee Pope, winner of season three of "The Voice," will return to NBC's hit musical competition series on June 4 with a live performance of her first single, "Wasting All These Tears." The song, which will be available on iTunes on the same day, has already received airplay on country radio.

Pope, who will release her first country album later this year, was a member of Blake Shelton's team and covered such artists as Keith Urban, Faith Hill and Miranda Lambert on her way to the title. It was Pope's version of Lambert's hit "Over You" that helped catapult her to the No. 1 spot on the iTunes all-genre chart. Throughout the competition, Pope's versions took the iTunes top spot multiple times.

Less than a week after her victory on the show, "The Voice: The Complete Season 3 Collection" climbed to No. 1 on Billboard's Heatseekers Albums chart.

Pope has already appeared on "Today," "Live! with Kelly & Michael," "The Tonight Show with Jay Leno" and performed with Train on "New Year's Eve With Carson Daly." This summer, she will hit the road with Rascal Flatts on the "Live and Loud" tour.

The Monday edition of "The Voice" (5.2) is the No. 3 primetime series on the broadcast networks this season in adults 18-49, the No. 2 entertainment series and the No. 1 reality series.