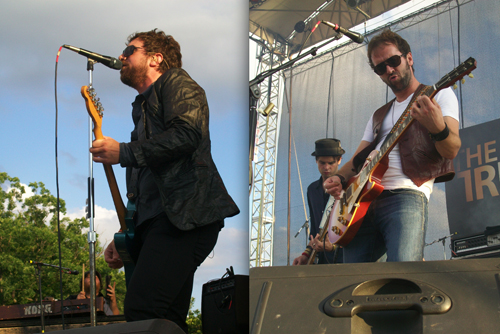 The Trews will rock Pubfest Friday.

The Lewiston Village Pub and Restaurant's annual fundraiser, Pubfest, returns to the village's Academy Park next weekend with some big changes. Out are the kiddie rides and carnival atmosphere. In are two national bands, The Trews and USS, and an increased emphasis on raising money for the Variety Kids Telethon.

Pubfest nearly achieved that vision last summer - but at a cost that was unacceptable to Scibetta.

"That was great, but it didn't bring as much as I hoped," he said. "Over the years, what has always consistently made the most money for charity was the beer tent and the bands. It was great to have all that other stuff, but there's so much work involved with having all that other stuff, and insurances and just a number of different things. It's difficult. And if it's not bringing in the money, then why do it?"

Families, he said, were reluctant to bring their children to an event called "Pubfest."

Pubfest kicks off Friday, May 31, with local bands Hellraiser and Jeremy Hoyle & The Factory Choir. Headline act The Trews, a popular Canadian band with a strong Western New York fanbase, takes the stage about 9:15 p.m.

"The Trews ... this is the only place in Western New York that The Trews are playing (this summer)," Scibetta said. "They didn't book them at Artpark, because they're playing Pubfest this year."

On Saturday, acts G-Spot Punchers, Twin City Kings, Mikanecho and Son of the Sun will set the stage for headline act USS (also on at 9:15 p.m.).

"We're expecting insane, insanely large crowds," Scibetta said. "Our goal would be about 5,000 people on Friday, about 3,500 people on Saturday, and about 1,000 people on Sunday, because Sunday is more geared toward an older, more adult crowd."

"It's a great lineup," he added. "If you're going to go big, why not just go really, really, really big? And that's what we did."

Of course, the real story with Pubfest is Scibetta's drive to raise money for local causes.

"As usual, 90 percent of our proceeds always go to the Variety Kids Telethon," he said. The rest will go toward Lewiston police and fire departments, and the village itself.

"Our local first responders always need that extra support - especially when you have the Lewiston Fire No. 1 that just built this absolutely beautiful firehall that we don't realize how lucky we are to have in Lewiston," Scibetta said. "The Lewiston Police Department ... with the amount that they do for festivals and Artpark and this and that, it's always good to give back." And the village, "Because they're so gracious in allowing us to have this festival and continue our passion in raising the money for Variety kids, it's only right to give back to them and help our local residents and the Village of Lewiston recreational program."

Pubfest is now the largest fundraiser for the Variety Kids Telethon. Since 2009, the event has raised more than $80,000.

For more information on Pubfest, and a full band schedule, visit www.lewistonvillagepubfest.com. Pubfest is free to attend, with VIP tickets available for purchase.