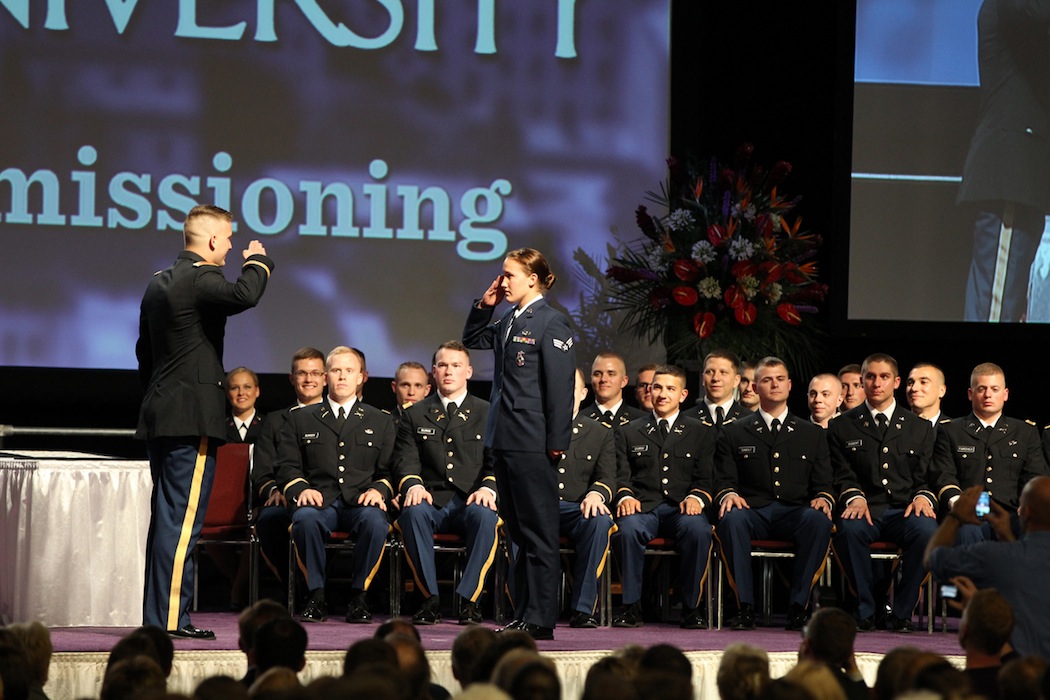 Senior Airwoman Chelsea Hibsch arrived in time from Korea to render the traditional first salute to her brother, 2nd Lt. Cy Hibsch. Her arrival was a surprise to her brother and parents.

Twenty-three Niagara University Reserve Officers' Training Corps cadets were commissioned second lieutenants in the U.S. Army during a ceremony held May 10 in NU's Gallagher Center. It marked the 72nd consecutive year that members of NU's Purple Eagle Battalion have taken the oath of office.

Upon completion of the oath, administered by Brig. Gen. Douglas R. Satterfield, commander of the 412th Engineer Command, family members pinned gold bars on the shoulders of the new second lieutenants:

The most memorable portion of the ceremony was when Senior Airwoman Chelsea Hibsch arrived in time from Korea to render the traditional first salute to her brother, 2nd Lt. Cy Hibsch. Her arrival was a surprise to her brother and parents.

According to Lt. Col. Paul T. Dansereau, a professor of military science at NU, this class exemplified the terms:

The new officers joined the less than 1 percent of the United States population who have sworn to serve and protect the nation. They are part of an even smaller percentage of the Army who are responsible for the health, welfare and training of the nation's sons and daughters during a time of continual conflict and uncertainty.

The Army ROTC program is designed to augment the college learning experience by identifying and developing future leaders. Its primary goals are to identify, instruct and commission young men and women for service as officers in the United States Army Reserve or the Army National Guard. Intermediate goals include providing students with the managerial skills necessary to organize and effectively run a student club, small business, or an Army platoon.

Over the past eight years, Niagara has been ranked in the top 10 percent of Army ROTC programs in the United States. The Purple Eagle Battalion's rise to excellence culminated in 2004, when it was the top-ranked program in the nation.