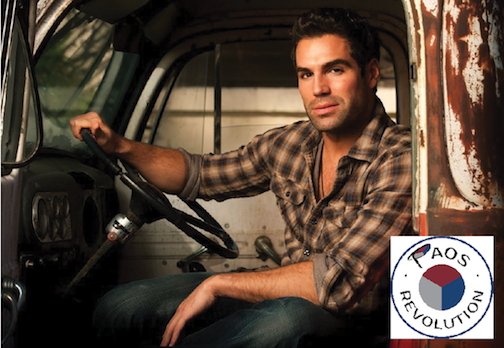 Actor, producer, founder and father. These are just a few of the many accomplishments soap star Jordi Vilasuso has achieved.

"All My Children's" Dr. Griffin Castillo is back in Pine Valley after the recent re-launch of the soap opera. On this day, however, Vilasuso is in Atlanta - and it's sort of to treat a patient like his character would on "AMC."

But Vilasuso won't be acting. Rather, the actor is introducing his newest venture: Creating a "Perfect Day" for soap fans. "Perfect Day," a new Web series, profiles soap actors and their biggest fans.

"We saw what was happening to the genre of daytime television. We came up with this idea ... to cater to the fans. Our whole motto is to flip the script. With everything that has happened with the fans, it's the reason 'All My Children' and 'One Life to Live' came back to the air. The fans were the reason with the campaigns. We want to give back," Vilasuso said.

"We get a daytime star and a charity they believe in, and why this charity story needs to be told, and how it contributes to society and to making life better. Then you have a fan, and them giving the fan a perfect day," said an enthusiastic Vilasuso. "The fans will get to see another side of the daytime stars they haven't seen before."

What made Vilasuso create such an inspiring idea? In conjunction with acting and spending time with his newlywed and daughter, he enjoys giving back. In his spare time, the actor attends many charities and various events that give back to society. One of his main goals is to contribute and make a difference in the world.

"When I started getting some kind of exposure, I started getting all these events and fundraisers and what have you. They were great; have some drinks, dance. But I never felt like me, myself, I made a difference and contributed," Vilasuso said. "If I can make it to charities, I try to go. I love to help out and there's so many. As a person who has some sort of privilege of influence, I feel I should do that. So I felt like this model, this show, will excite and inspire the audience.

"If I watch movies, I like it to be intriguing. When I watch something, I know I've got my money's worth when I laugh and cry. When the idea for 'Perfect Day' came up, I thought, 'Wow, this is something worth pursuing,' rather than just showing up to charities. I feel like this kind of vehicle puts exposure on a whole other level."

The pilot episode features the actors giving fan Jane Rosko (Dockweiler's sister) a perfect day for her son, who has autism. Vilasuso's focus for the pilot was Jacob's Ladder Center for Autism in Atlanta. His goal was to give super mom Rosko a perfect day, and flip the script to indicate she is the star of the show. Vilasuso said Rosko is a huge fan of "AMC," and was thrilled to hear of the webisode.

"Whether it's a great restaurant, spa or local attraction, we will highlight the local charity. We're interested on shining light on smaller charities. Jacob's Ladder Center is a great one," Vilasuso said. "Jane was a great choice, because she is our partner's sister and she is a huge fan of mine. I've had some phone conversation, and she's been a fan of mine since I starred in 'Guiding Light.' Jeff has seen what she's gone through and he thought it was the perfect match. We feel, for this episode, it worked out perfectly. We're giving back, and it's something she has a very intimate relationship with."

According to Vilasuso, fans can expect the show to have an "Extreme Makeover" feel to it. Both shows focus on giving back to society and charities while utilizing a few celebrities in the process.

In this case, whether it is go-cart racing, playing baseball, etc., fans can anticipate to laugh, cry and learn more about their favorite soap stars.

"It's a feel-good reality show," Vilasuso said. "We're going to use somebody who had some sort of celebrity status. We're going after the soap fans. Soap fans are very loyal. We want to engage it and let the story be told and how it contributes to society and making life better. I'm so passionate about it, because there's a lot of good reality TV, and we want to promote a good product fans will enjoy to watch."

Vilasuso and Paos Revolution anticipate great results and fan responses from the production and the pilot episode, which highlighted autism. April was Autism Awareness month.

In each webisode, 10 percent of the funds raised will go directly to the charity of choice.

"It will exist for all the right reasons. It's not just some reality show. People ask 'What are you doing in your down time when you're not acting?' It took me years to figure out what am I doing. I am so passionate about this project. ... It's fulfilled me," Vilasuso said. "I contacted everyone on my Facebook and Twitter and said, 'Hey, please check this out.' I've never spent the amount of work doing this. The replies and messages I got back on Facebook amazes me and made me think, 'Wow, this is really relevant to our society. It's going to make a difference.' "

"Perfect Day" will air this summer. Fans can watch the pilot episode at http://www.paosrevolution.com. To help contribute and make a difference, visit www.indiegogo.com and click "make a contribution." The set goal for the summer is $25,000.

To watch Vilasuso on "All My Children," visit www.hulu.com.