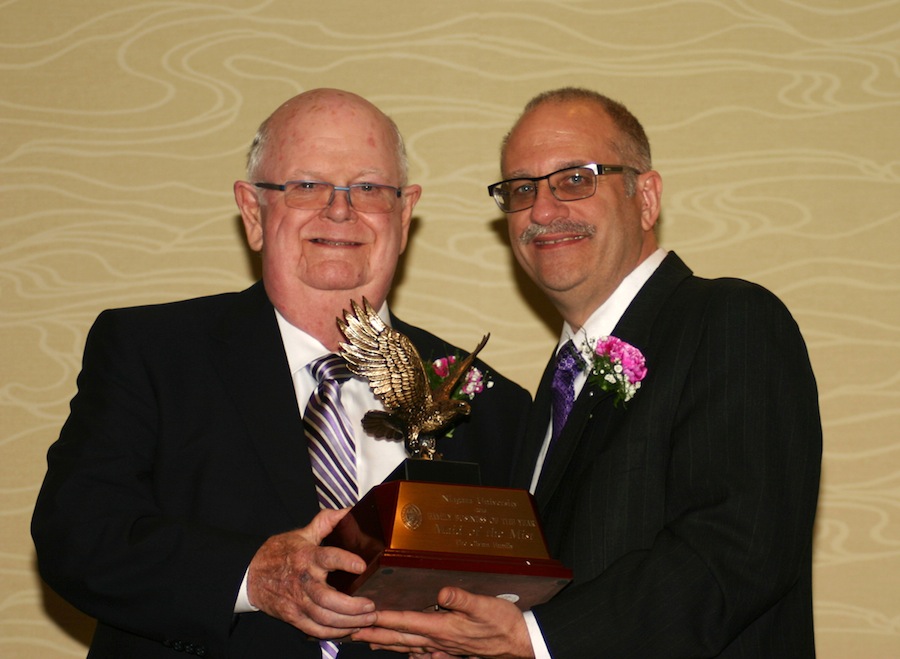 James Glynn, '57, owner of the Maid of the Most Corp., receives the award for Family Business of the Year from Dr. Shawn Daly, dean of NU's College of Business Administration.

Niagara University's College of Business Administration presented awards to five business leaders, alumni and students during its 23rd annual Business Appreciation and Accounting Banquet, held April 25 at the at the Buffalo Marriott.

More than 230 people attended the event, which was emceed by WGRZ-TV anchor and 1986 NU graduate Maryalice Demler.

The Maid of the Mist (and the Glynn family) took home the award for 2013 Family Business of the Year. The Glynn family has overseen the prominent Niagara Falls-based business since 1971, when James Glynn, Class of 1957, became president of the Maid of the Mist Corp. Under his and his son Christopher's, '85, leadership, the business has grown exponentially, now serving more than 2.5 million passengers annually. The company's effective marketing strategy draws tourists from around the world to ride the iconic boats, resulting in a major economic boost on both sides of the border. Within the past 42 years, the Glynns have demonstrated their commitment to the well-being of the region. They are major supporters of Niagara University, Niagara College (Ontario), Mount St. Mary's Hospital, Niagara Falls Memorial Medical Center, Opportunities Unlimited, the Foundation of the Roman Catholic Diocese of Buffalo, the Health Association of Niagara County, and Family and Children's Service of Niagara, among many others.

Freed Maxick CPAs P.C., the recipient of this year's award for Distinguished Accounting Firm, is one of Western New York's premier accounting companies, with offices in Buffalo, Batavia, Rochester and Syracuse. It's affiliated with the Leading Edge Alliance, a national association of more than 40 national accounting firms. Aside from its excellence in accountancy, Freed Maxick is also extensively involved in the community. The firm is a major supporter of organizations such as the Alzheimer's Association, the Buffalo Hearing & Speech Center, the Buffalo Museum of Science, the Catholic Health System of WNY, the Leukemia Society of America, Mount St. Mary's Hospital and Shea's Performing Arts Center, to name a few. More than 25 Niagara graduates currently work for Freed Maxick, including managing director Ronald Soluri, Class of 1973.

The recipient of this year's Corporate Leadership Award was Joseph McDonald, president and CEO of Catholic Health. McDonald oversees the second-largest hospital system in Western New York, with more than 8,500 employees and 1,400 physicians. McDonald came to Catholic Health in 2002, just a few years after the merger that created the integrated system, and has successfully charted the company's strategic direction in the ever-changing landscape of health care reform. Today, Catholic Health's programs, services and relationships with the medical community are better aligned to ensure the continued success of its mission "to reveal the healing love of Jesus to those in need." During McDonald's tenure, Catholic Health has experienced a growth in services, the introduction of advanced technology, improved quality and safety, and a return to fiscal stability. Its annual revenues presently stand at $843 million. The organization's charity care and community services contributions have also increased, to more than $47 million annually. In 2009, Catholic Health and Niagara University partnered on an educational initiative designed to prepare MBA students for leadership positions in the health care industry. Under McDonald's leadership, Catholic Health also teamed with NU's Department of Nursing to offer a unique "RN-to-BSN" degree pathway for registered nurses who want to advance their careers.

The origin of St. Michael's Hospital, Niagara's 2013 Canadian Business Leader of the Year, dates back to the 1890s when the Sisters of St. Joseph operated a boarding house for working women in the south end of Toronto. That safe haven, Notre Dame des Anges, became St. Michael's Hospital, as the sisters sought to respond to need for care among the poor in Canada's most populous city. St. Michael's began receiving medical students in 1894. In 1920, administrators negotiated a formal agreement with the faculty of medicine at the University of Toronto that continues to this day. As Toronto grew and expanded, so did the hospital. Ongoing physical expansion, most prominent in the 1960s, increased the original 26-bed facility to 900 beds. From that point on, St. Michael's distinguished itself as one of the most innovative medical and teaching facilities in the world. Canada's first successful heart transplant and robot-assisted uterine tumor removal took place at St. Michael's, as did North America's first muscle transplant. The downtown facility, known for exceptional and compassionate care of its patients, especially the homeless and disadvantaged, has come to be known as the Urban Angel.

The Outstanding MBA Student for 2013 was Mario J. Colucci, who works as an assistant vice president and manager at M&T Bank. Colucci earned a bachelor's degree from The George Washington University in May 2007. Shortly after interning at M&T Bank and graduating from GW, Colucci returned to M&T to work as a banking officer and business and planning analyst. Colucci later completed M&T's management development program while still managing the bank's day-to-day operations. Colucci's next step in professional development led him to Niagara University, where he enrolled in the MBA program with a dual concentration in strategic management and human resources. Shortly thereafter, Colucci was promoted to an assistant vice president position at M&T, where he manages specialized brokerage services as well as reporting and analytics. Colucci has completed his Lean Six Sigma Green Belt certification, and holds FINRA Series 7, Series 24 and Series 99 securities licenses. He currently maintains a 4.0 grade-point average in Niagara's MBA program.

Just before the banquet concluded, Dr. Shawn Daly, dean of the College of Business Administration, announced to attendees that Niagara will be featured in a four-page spread in next month's edition of C.E.O. magazine. The institution will be recognized among the top 100 business schools in the nation.

The awards banquet was preceded by a health care symposium geared toward achieving improved population health, bettering the patient experience and reducing the cost of care.