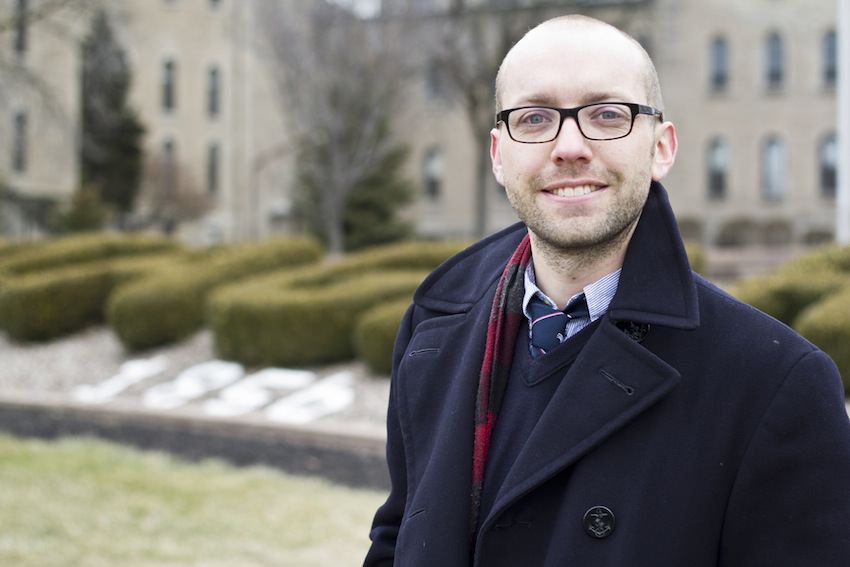 Dr. Doug Tewksbury, an assistant professor of communication studies at Niagara University, has been awarded a Fulbright Scholar grant to conduct research at the Institute on Globalization and the Human Condition at McMaster University (Hamilton, Ontario) in the fall of 2013.

The announcement was made by the U.S. Department of State and the J. William Fulbright Foreign Scholarship Board.

Tewksbury joins the approximately 1,100 Fulbright Scholars from the U.S. who will travel abroad next year. The flagship international educational exchange program is designed to increase mutual understanding between people of the U.S. and other countries.

"This is a wonderful and well-deserved honor for Dr. Tewksbury, a young professor who already possesses an impressive background in scholarly research, service learning and social justice," remarked Dr. Timothy Downs, vice president for academic affairs.

As a Fulbright Visiting Research Chair in Globalization and Cultural Studies, Tewksbury plans to investigate the use of social media as it relates to the Canadian Occupy Movement and the recent student protests in Quebec. He'll spend a few weeks in each city, conducting interviews and ethnography work, and making field visits, while also collecting social media data.

"I'm captivated by how social and mobile media build online-offline community amongst organizations that have no center, no hierarchy and no formal structure, but still are able to construct a consensus-based movement," explained Tewksbury, a Niagara Falls resident. "It's such a new form of protest and new form of technology, and we still don't know a whole lot about how these movements' members worked together, or how they were able to organize and communicate with each other in the way that they did, especially with their social and mobile media uses. I'm interested to find out."

A 2001 graduate of Vanderbilt University, Tewksbury earned a master's in media studies from Suffolk University, where he also worked closely with faculty and undergraduate students to increase community service and civic engagement, in addition to teaching workshops on social justice and social action. He later earned a doctorate from the College of Communications at The Pennsylvania State University, before joining the Niagara University faculty in 2009. Tewksbury has been a driving force in the communication studies department's integration of topics related to social justice into its curriculum.

"Fulbrighters enrich the educational, political, economic, social and cultural lives of countries around the world," wrote Fulbright Foreign Scholarship Board Chairman Tom Healy in a congratulatory letter to Tewksbury. "We expect that you, too, will become involved in the community while on your Fulbright exchange. In so doing, you will demonstrate the qualities of service, excellence and leadership that have been the hallmarks of this program for more than 60 years. As a representative of your country in Canada, you will help fulfill the principal purpose of the Fulbright program, which is to increase mutual understanding between the people of the United States and the people of the more than 150 countries that currently participate in the Fulbright program."

For information on Niagara University's programs in communication studies, call 716-286-8285 or visit www.niagara.edu/communication.