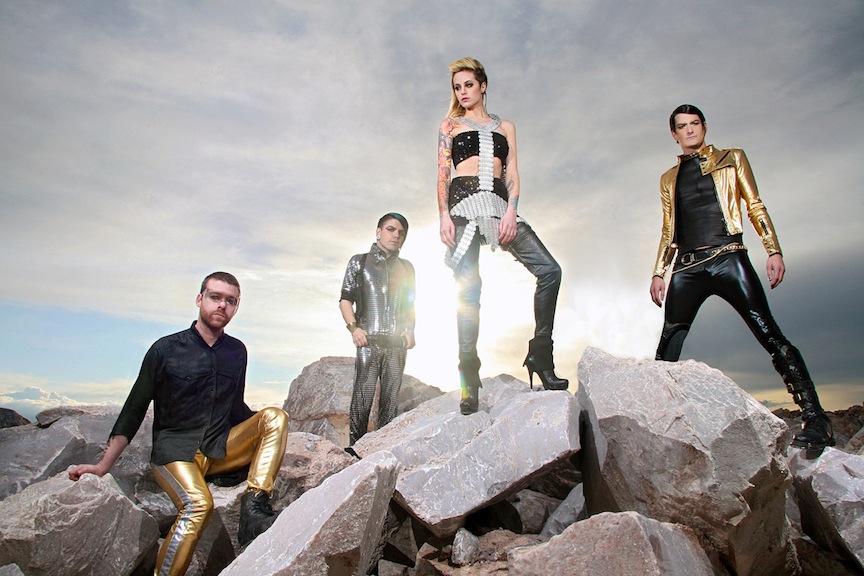 If you've ever wondered what the '80s would sound like, or how it would appear, if the decade was somehow thrown into a time warp and awoken in 2013, well, this is it.

Shiny Toy Guns is a modern-day interpretation of the 80s. The band is like some sort of giant Rubik's Cube with colors representing Depeche Mode's synthesizers, Blondie's vocals, Peter Gabriel's baritone and Flock of Seagull's hair. But unlike the outdated, tedious child's toy, STG is surprisingly current, and packing plenty of punch.

"The best, unique quality about our live show is the visual aspect of it," he said. Lighting and effects, he noted, "that's very, very important to the show. Because you don't go hear a show, you see a show. We really apply the effort, the energy, the creative input and the money on making sure there's a great lighting package and it's all choreographed with our songs. And it's really interesting and really exciting to play that. It's so much more fun to really put on a show and perform rather than just get up there in a pair of jeans and just play a tune."

"We're very curious to see what's it's going to be like. Very curious," Dawson said. "We've never been there, ever, even on a tourism level."

The band is touring in support of its third album, the aptly titled "III."

"What we wanted to do was make something that brought full-circle the sound of the band," Dawson said. "If you were familiar with some of the earlier stuff, you'd kind of feel this transitioning between electronic music and rock music and pop music."

The third album, then, "is the merging of all of our favorite kinds of music into one singular piece of art," he said.

STG's original lineup reunited for this album. Carah Faye had left the group in 2008 only to be surprised in Sweden (where she was living) by Dawson and Mikey Martin (drums). The bandmates settled any differences and, alongside Chad Petree (vocals, guitar), set out to make "III."

"This is the original band. ... We're a family; so, we're very happily staying right where we're at right now," Dawson said. "This is how we started, and this is how we are, and how we're going to stay."

The Tour Odyssey, featuring The Dirty Heads and Shiny Toy Guns with Midi Matilda, and Oh No Fiasco, kicks off at 7 p.m. at the Rapids Theatre, 1711 Main St., Niagara Falls. For more information, or for tickets, visit http://www.rapidstheatre.com.