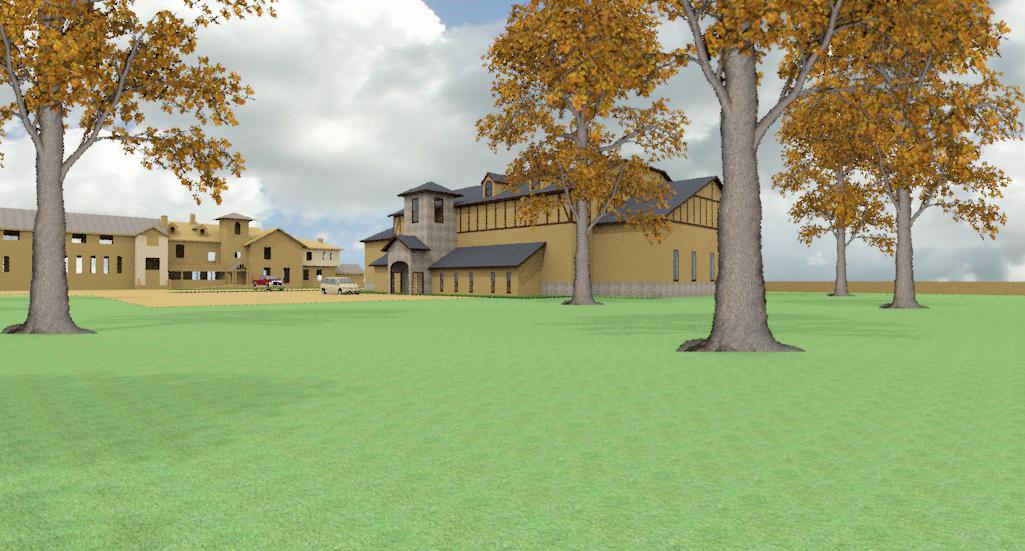 Pictured is an artist's rendering of the proposed tennis/recreation building on the WTS property. (photo by Giusiana Architects & Engineer)

Tennis center to be built at WTS

Trustees in the Village of Lewiston said Monday it's their intention to not raise taxes in the 2013-14 budget.

"The tentative budget calls for no increase in taxes. It is at $7.12 per $1,000 (of assessed valuation). Hopefully we can keep it at the $7.12," said Mayor Terry Collesano. "I must admit that all the departments came in and they really pulled the belts in a little tighter, another notch, but I believe that we'll be able to present the budget at $7.12 at this point."

As part of a projected $3,339,986 budget, village employees would receive a 3 percent pay raise. Village residents, on the other hand, would receive a pay cut, of sorts. The board seeks to lessen the municipal water rate and eliminate a maintenance fee.

"In crunching the numbers, from when we were looking at merging with the (Town of Lewiston's) water, we decided not to do that, because we figured out that 70 percent of our village residents would be paying an increase in their water rates," Collesano said.

"But going through the crunching of the numbers, we found out that, with what we already charge, that we can reduce the water rates - and we will be reducing the water rates, as well as eliminating the $5 per quarter surcharge," he added. "The residents can expect to see a decrease in their water bill soon."

The $5 fee, meanwhile, was designed to offset the cost of upkeep on the water lines.

The board is required to hold a public hearing prior to these rate changes taking effect. If the measures are ultimately approved, Village Clerk Anne Welch said the adjustments would begin with the July water bill.

The Village Board approved a revised development plan at 435 N. Second St., for a private tennis/recreation building.

Waste Technology Services President and CEO Gary Hall was initially granted permission to build a tennis court in 2011. However, his development plan expired during the time in which he was proposing to spearhead financing for a public recreation center in the Village of Lewiston, the Town of Lewiston or at Niagara University.

When Hall couldn't reach an agreement with any of the above, he returned to his original idea.

This tennis center will be slightly different than what was originally proposed. The building will now be freestanding, and not attached to WTS. It will be situated on the north side of the parking lot, with its front facing south.

The tennis center's main body will be 80-by-120 feet long, and up to 35 feet tall, which is roughly the same height as WTS. The new development's exterior will match the existing building.

The Planning and Historic Preservation Board approved the revised development plan on March 11 (Chairman David Giusiana abstained from the vote, as he created the design for Hall).

"It really complements the other building," said Planning Board member Jamie Symmonds.

"It looks nice," added Dave Maslen. "I think it's another improvement to the area."

Hall did not attend either meeting.

A number of warm weather events were approved over the course of two board meetings this month.

•Water Street Landing to use the North Water Street parking lot for a concert on Sunday, May 19. Ambrosia is expected to headline "Back on the Water," which runs from noon until 8:30 p.m.;

•Mount St. Mary's Hospital and Health Center to use Marilyn Toohey Park for its annual 5K run starting at 9 a.m. on Saturday, June 22;

•The Niagara Wine Trail to use Academy Park from noon until 7 p.m. the weekend of July 27-28 for wine tasting, food sales and a farmers market; and

•Theatre in the Mist to use Academy Park from 4 to 8 p.m. Thursday, Aug. 8, for a Chiavetta's chicken barbecue and basket raffle fundraiser.

On March 18, the board OK'd facility contracts for:

•Sparkle Marketing & Events to use Academy Park on Sunday, June 23, from 8 a.m. until 4:30 p.m., for a health, wellness and fitness festival, and a 5K run, all held in conjunction with Lewiston's new ChrisFit Wellness Center; and

•The Lewiston Village Pub and Restaurant to use Academy Park from Friday, May 31, through Sunday, June 2, for its fifth annual PubFest, held to benefit the Variety Kid's Telethon, and Village of Lewiston first responders.

Trustees approved a motion to close Niagara Street, between Plain and Cayuga streets, for "Historical Happenings at the Lewiston Museum." This Historical Association of Lewiston event runs from 1 until 4 p.m. on Sunday, July 14. HAL was also given permission to use the Hennepin Park Gazebo on Sunday, Aug. 18, from 1 until 3 p.m., for a family-friendly musical performance. The public is invited to attend.

Finally, village residents Mamie Simonson and Claudia Marasco will lead the collections charge outside of Artpark for a fifth year. The board approved their request to solicit donations from patrons entering into the venue for the "Tuesday in the Park" concert series.

Proceeds will once again benefit Community Missions, and food pantries at Heart, Love and Soul in Niagara Falls and Care and Share in Ransomville.