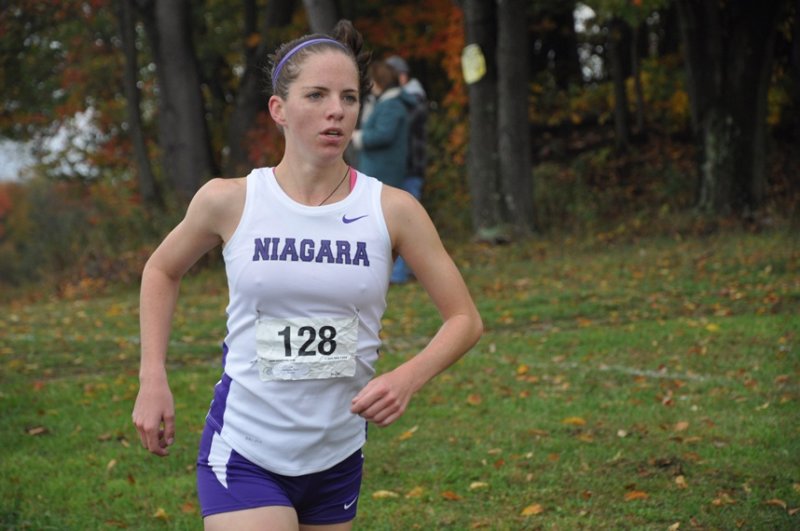 Nicole Mehlman, a communication studies major at NU, will run this summer in the Ulman Cancer Fund for Young Adult's 4K for Cancer.

Nicole Mehlman is on the run for cancer

After college, most people look for a job, try to move out of their parents' house, and worry about paying back student loans.

Niagara University student Nicole Mehlman, on the other hand, is going to go for a run.

Across the entire country.

This summer, Mehlman, a communication studies major, will participate in the Ulman Cancer Fund for Young Adult's 4K for Cancer. She will travel from San Francisco to Baltimore - more than 4,000 miles - in an effort to raise money to aid young adults affected by cancer.

She got the idea from fellow NU student Vince Schiano, who spent last summer bicycling the 4K for Cancer. "He told me that I would be perfect for (the run); he really encouraged me to do it," she said.

"The trip was absolutely life-changing. I have never been able to meet so many new people and see so many things and make a difference all at the same time," Schiano said of his experience.

In May, Mehlman, along with a number of young adults from around the country, will embark upon the inaugural 4K for Cancer run. Each of the 30 days of running will consist of 12 one-mile increments in a relay style, according to www.4Kforcancer.org. Runners will ride in a chaser van while not doing their leg of the relay.

This type of self-propulsion from ocean to ocean is not an easy task.

"It's insane how much you need to focus. It's so easy to lose track of your goal, especially when it's 112 degrees in the middle of Kansas," Schiano said.

"People ask me 'Are you scared?' No, I'm just excited. I don't really have any fears about any of it. Maybe I am a little crazy?" said Mehlman, who ran cross country through high school and college.

The 4K for Cancer began in 2001 with students at Johns Hopkins University, led by Ryan Hanley, who lost his father to cancer. The bike ride is 70 days and riders in groups of about five go between 40 and 130 miles daily, with rest stops every 10 to 20 miles, Schiano said.

The 4K for Cancer has sponsored up to four cross-country bike rides every year since and, in 2012, merged with the Ulman Cancer Fund for Young Adults to consolidate efforts to a common goal.

Supporting the fight against cancer is personal for Mehlman. Her aunt was diagnosed with breast cancer and is now cancer-free after having a double-mastectomy. Her grandfather has recovered from skin cancer. A neighbor also survived throat cancer.

"It was my 21st birthday and his fifth year in remission anniversary and we were celebrating at the same time," Mehlman said.

She decided the 4K for Cancer would be worth her while. "When I went to the informational meeting about the whole thing. I fell in love with it. ... I love running, so this is perfect."

Despite recent controversies involving Lance Armstrong and his connection to the Livestrong Foundation, Mehlman strives to be a positive role model.

"It's not just, 'Oh, I get to run across the country.' That's great, but I also want to be a responsible representative for a cause, and I hope people don't lose faith in these causes just because of one person," she said.

Of his own experience, Schiano said, "Once the ride started, the connection to the cancer community grew (exponentially)." He got involved in the fight against cancer after his aunt was diagnosed with breast cancer. "She's been my inspiration since the start."

After spending time volunteering at treatment centers and hospitals, Schiano said he feels connected to a much larger community.

"You start riding for one or two people, but then you end up riding for 400, 500 people by the end, and it turns into you just wanting to support anyone who's been touched by the disease," he said.

After biking across the country to support the cause, Schiano, a senior CMS major with a minor in psychology, aspires to do public relations work for a not-for-profit cancer organization after graduating in May.

According to www.ulmanfund.org, more than 70,000 young adults are diagnosed with cancer every year. "It's a demographic that people tend to forget about because young adults are supposed to be healthy," Mehlman said.

"There's no better time than now to get involved in the young adult cancer awareness and support campaign, because a lot of young adults need that help and they're not getting it," Schiano said.

Mehlman has already raised more than $2,400 toward her ultimate fundraising goal of $4,500. Her deadline is May 15. "It's all done via this profile on the Internet. ... It's really quick; it's really easy for people to donate," she said.

Schiano began fundraising for his trip by collecting bottles and cans around campus and telling people about the cause. "I would tell them, and they would tell someone else, and it turned into networking, and a lot of people that I didn't even know started supporting me," he said. "It really taught me the generosity of people."

Mehlman said, "Eighty three percent of every dollar goes towards the people that need it. I think it's important for people to know."

The end of college will be the start of quite a journey for Nicole.

To find out more about Nicole, or to make a donation, visit http://4kforcancer.org/ profiles/nicole-mehlman/.