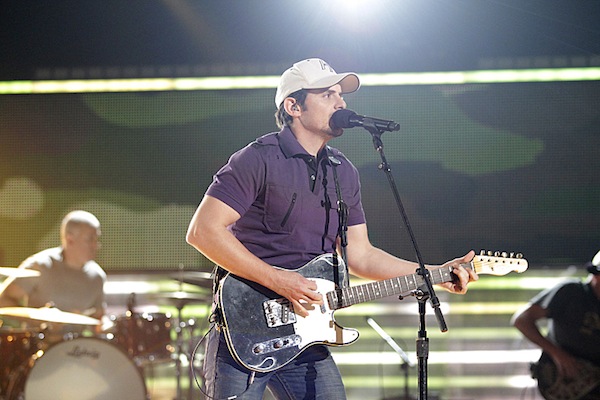 Brad Paisley, headliner of the third Annual ACM Fan Jam and post-award concert, will perform along with his special guests Dierks Bentley, Hunter Hayes, and ACM New Artist of the Year Presented by Kohl's Department Stores nominees Brantley Gilbert, Jana Kramer and Florida Georgia Line at this year's Fan Jam, the fans-only, live concert event taking place during and after the 48th Annual Academy of Country Music Awards, part of which will be broadcast during the Awards Sunday, April 7 (8 p.m.), on the CBS Television Network.

Grammy Award-winning musician LL Cool J, star of the hit CBS drama series "NCIS: Los Angeles" and who will be releasing his new album "Authentic" on April 30, will make a special appearance during the event. Storme Warren, host of GAC's "Headline Country," will emcee the Fan Jam for the first time.

The Fan Jam will also feature an additional performance in support of the ACM "Lifting Lives" on-stage moment, an annual initiative that raises money for designated charities, with the participating artist to be announced in the coming weeks.

As previously announced, multiple ACM Award winner Paisley will headline this year's Fan Jam, which gives country music lovers the ultimate fan pass to be part of the Academy of Country Music Awards. During the three-hour broadcast from the MGM Grand Garden Arena, there will be live ACM Fan Jam performances by top tier music acts via remote from the Orleans Arena in Las Vegas, with the party continuing in a post-award concert.

After making it through the first round of fan voting, nominees Gilbert, Kramer and Florida Georgia Line will now compete for the coveted ACM New Artist of the Year Presented by Kohl's. The winner will be awarded on the ACM Fan Jam stage during the live awards broadcast. Fans can vote for their favorite new artist at www.VoteACM.com beginning Monday, March 25, at 3 p.m. ET, until Sunday, April 7, at 8 p.m. ET (before the live show starts).

The ACM Fan Jam is part of "The ACM Experience," which takes place in conjunction with "The Week Vegas Goes Country," and is a family-friendly country music lifestyle event that includes the free-to-the-public ACM Expo and the ACM Party for a Cause Festival to be held April 5-7 at The Orleans Hotel and Casino in Las Vegas.

For more information on the ACM Fan Jam, The ACM Experience and the 48th Annual Academy Of Country Music Awards, visit www.ACMcountry.com, on Facebook at www.facebook.com/AcademyOfCountryMusic or on Twitter at www.twitter.com/ACMawards.

The 48th Academy of Country Music Awards is dedicated to honoring and showcasing the biggest names and emerging talent in the country music industry.