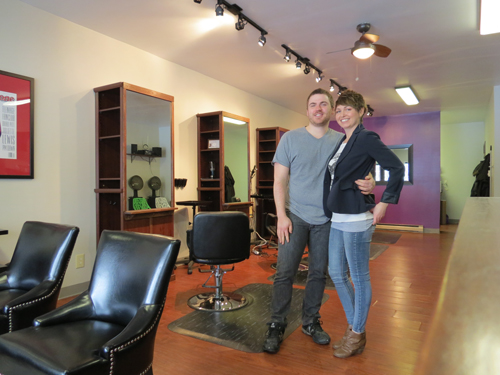 William Beyer and Stephanie Speziale have opened Studio 763 in the Village of Lewiston.

Studio 763 off the Center Street strip

On the outside, there's nothing special about Studio 763, Lewiston newest hair salon. There's no fancy paneling or intricate word work. You won't find any fountains or statues in front of the building. Flashing neon signs are nowhere to be found.

But step inside, and owners William Beyer and Stephanie Speziale promise to provide a cut, color or style that will have people noticing you.

"Our work kind of speaks for itself," Beyer said. "I think we're very well-educated in our field. We're current in all classes. We're both very easy to talk to. I can go from talking to a 92-year-old woman to a 17-year-old girl in a matter of a minute. I build a connection with people - it's not just about doing their hair, it's about fulfilling what they need or want from me. It's not about me at all, it's really all about the client."

This customer-comes-first attitude extends to the parlor's interior, which is large and comfortable, and to its product line, too.

"What we're selling here, not a lot of other salons are selling," Speziale said. Studio 763's product line includes Surface and KMS.

"It's a very high-end product compared to a lot of other ones," he said.

"And we're really fair with our prices, I think," she added. "A lot of (other salons are) double."

Beyer and Speziale are familiar faces in Lewiston, having previously worked on Center Street.

"It was time," he said of opening Studio 763. "We were tired of just always having to answer to somebody. So we figured why not make a better working environment for us, because we're pretty much like best friends? We figured, why not go into business that way?

"It was the right time in both of our careers to do this."

The village was an ideal location, Beyer, said, because "I like the community vibe of a (Williamsville)-type, but not as busy."

"I feel like I know people, and I'm not being rushed to do everybody's hair," he said. "It's just a really nice, small community. And everybody has your back - like the businesses and the paper. Everyone is just really nice, and they accepted me for who I am, and also Stephanie, too. That was a huge plus. So many nice people around here."

Lewiston, of course, offers no shortage of hair salons. But, "If you end up getting the right person in that chair, she'll bring 10 of her friends," Beyer said.

"I think it's just about as hard as anywhere else," Speziale said. "There's a million salons anywhere you go. If we were to move to Buffalo, it would be the same type of thing. I guess I would rather have the small town competition rather than a larger (market)."

He suggested, "Honestly, competition is great ..." as she interjected, "it keeps you on your toes."

"You have to be educated on all the new things because everybody wants the newest, the hottest things," he said. "If you don't know it, then you kind of don't have that advantage anymore."

Studio 763 is located at 763 Cayuga St., Lewiston (in the mini-plaza). Hours of operation are Wednesday through Saturday, from around 9 a.m. until about 6 p.m.