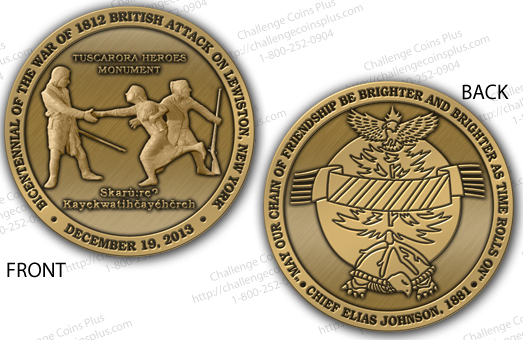 The Historical Association of Lewiston announces the availability of a just-minted "Tuscarora Heroes" commemorative coin.

2013 is the bicentennial year of the brave action of the Tuscaroras. This extra-large, 2-inch diameter keepsake can be cherished for generations as a lasting tribute to the Tuscarora Nation and to the brave men who helped Lewiston residents escape the War of 1812 British attack - a rare moment in American history when Native Americans saved the lives of white settlers against a foreign invasion.

The coin is available for $10 at the Lewiston Museum. All proceeds from the sale of the coin will go to the "Tuscarora Heroes" monument project, which will culminate in an unveiling on the evening of Dec. 19, 2013 - 200 years to the day when a small band of Tuscarora men bravely halted the British attack on Lewiston and enabled dozens of Lewiston citizens to escape. The large, bronze monument will stand for thousands of years as a tribute to the Tuscaroras - a gift of the ages from the people of Lewiston for the friendship and guardianship of the Native American tribe.

Features on the impressive and highly collectible souvenir coin include a high-definition, 3-D relief of the monument image on the front in matte finish gold with an antique recessed metal background. On the reverse is a distinctive Tuscarora emblem, which depicts the venerated native symbols of the turtle, the northern white pine tree and eagle across the face of the sun. Overlaying the totem is a belt with six stripes, each representing a nation within the Iroquois Confederacy, the oldest established democracy in the world (founded in 1142 A.D.). The Tuscaroras joined the confederacy as the sixth nation in 1722.

The bicentennial date of "December 19, 2013" is engraved on the front of the coin. On the bottom of the recessed field are the words in the native Tuscaroran language, which translate to "Tuscaroras are courageous" (there is no word in the Tuscarora language that is the equivalent to "hero").

The back of the coin features a quote from Chief Elias Johnson, a 19th century Tuscarora chief and author. His comment: "May our chain of friendship be brighter and brighter as time rolls on."

To order the commemorative coin, call the Lewiston Museum at 716-754-4214 or visit 469 Plain St. (call ahead to make sure someone is on site.) Those interested can also send a check payable to the "Historical Association of Lewiston, Inc." to the above address.