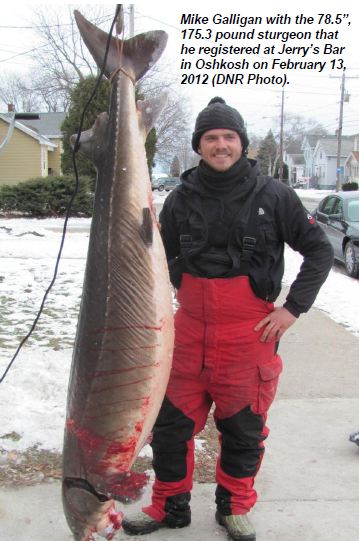 One nice, comfortable day I drove down to the Lewiston Landing and ran into three other old fossils hanging around; one was leaning over the rail expecting to see some gigantic fish swim up within sight so he could ooh and aah at the monster, the other two were checking to see what boats were out fishing, and we all started chewing the fat. We all knew one another because we were associated somehow within the fishing circles, or should I say fishing community. If you visit the Landing, it is likely you will see some of us old codgers parked in the handicapped area at the Landing overlooking the river.

One guy, Mike, the gabbiest, said, "Mark, did you hear about the 'Bigfoot' that was spotted last summer over off Balmer Road in the woods? Ya know, over there, between Balmer and Swann?"

After a chuckle from 'Crappie King' Bill and the others, I asked if he was serious. "Yeah!" Was his reply. I told him, "I think you watch too much Animal Planet on TV." Then I asked him, "Did you see it yourself?" "Nope, but my buddy said he heard about it."

I thought, here we go again, somebody's imagination gone astray. It was probably a deer, a big dog or even a coyote this person saw and the story grew into being a "Bigfoot" sighting.

I told Mike, "Do you realize 'Bigfoot' or 'Sasquatch' stories have been around since the late 1800s and yet up until today, no one has ever proved them to exist?" No one ever found an expired one where it could be positively identified. Then I mentioned, right here in our own Niagara River, we have something that has existed since the dinosaur days and it still exists today, and it's really real. When I said that, I was looked at like some kind of person that has lost it. Then Kool Jimmie, the coolest guy of the bunch spoke up and said, "Are you talking about sturgeon?" Yes, I told him. Lake Sturgeon to be exact.

They were abundant in the Niagara River, and lakes Erie and Ontario at one time. In the 1800s and early 1900s they were much sought after in the Great Lakes. Now they are on the U.S. Fish and Wildlife Service endangered species list, being put on the list means 'no fishing, no possession' whatsoever. Whatever killed the dinosaurs, the sturgeon survived, and they also made it through the ice age. They were a prized and abundant food for our early settlers. In later years over harvesting has been blamed as part of their demise. Of course, habitat and water pollution had something to do with it too.

In Wisconsin, on Lake Winnebago, and the upper lakes system of Winnebago there is a special, highly controlled spearing season where ice huts are put out and ice holes are drilled. The people flock to the hard waters just for a chance to spear one of these monsters. The Wisconsin DNR watches over this, and the season only lasts 15 days or until any of the pre-set Winnebago system-wide harvest caps are reached, whichever comes first. This year it will run from Feb. 9 to Feb. 24; fishing is from 6:30 a.m. to 12:30 p.m. only.

A limited number of sturgeon permit/tags are available, (500), and lucky fisherpersons have to win a permit tag by lottery. The Wisconsin winter spearing season for sturgeon has been open since 1941, through World War II years up to today. Last year there were 324 sturgeon registered, and the largest tipped the scales at 179.8 pounds. Most were less than 100 pounds.

In the Lower Niagara, sturgeon is caught incidentally by fishermen, and some can be a real struggle to get to the boat to retrieve your hooks. Anyone I have ever known that caught one will bring it up to the boat for a quick picture taking, and release it immediately. They spawn in May/June, and I hear a lot being caught in August/September, mostly in the Coast Guard Station area. I will do a story on our Niagara River Lake Sturgeon at a later date, and I'll have some pictures showing some our local fishermen with their catch.

In the meantime, keep sharp eyes out for the "Bigfoot" roaming around. Don't worry, it can't hurt you because if you see one, it will be an illusion. "Bigfoot" might be recognized as a real creature by some scientists, but none of them have ever seen one either.

Comments, suggestions, email me at [email protected] call or email the Sentinel. Spring is just around the corner according to Punxsutawney Phil. (If you believe that, you are a "Bigfoot" believer too.)