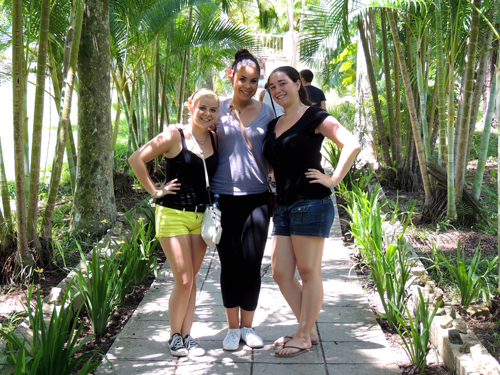 Sanborn resident Stephanie E. Petrie was among a contingent of Canisius students who did something that very few Americans are permitted to do legally: She spent five weeks living and learning in the Republic of Cuba.

Petrie is a senior English major in the All-College Honors Program.

The group did so under the guidance of Richard Reitsma, Ph.D., assistant professor of Spanish and Latin American studies, and Tom Hansen, Ph.D., who served as adjunct professor of international relations during the trip.

"The purpose of this trip was to give students a richer understanding of what the revolution accomplished for Cuba and what still needs to change," said Reitsma.

"Americans are only permitted to travel to Cuba for humanitarian, academic, or family purposes and must receive approval from the U.S. Department of Treasury," explained Jerome L. Neuner, Ph.D., associate vice president for academic affairs.

While in Cuba, students lived and studied at the Centro Memorial Martin Luther King Jr., a Christian-based center for social justice in Havana. Reitsma taught two courses, Spanish language and Cuban cinema post-revolution, which addresses social justice issues in Cuba such as poverty, class, race and gender. Hansen, who also serves as international educational director of the Mexico Solidarity Network, taught Cuban politics and social history. Guest speakers included leading Cuban university professors, social activists and political leaders. Beyond the classroom, Canisius students explored the Cuban plight for food, transportation and housing. One assignment required each student to purchase a week's worth of groceries for a fictional family of three, with only 100 pesos (or the equivalent of $4 dollars).

"Poverty is a way of life in Cuba. In the United States, we take so much for granted. I can no longer complain when things such as food and living accommodations are not to my liking, because there are so many people in Cuba living with so much less and manage to keep a smile on their faces," said Petrie, a graduate of Starpoint High School.

"This trip gave me proof that I do not always need to be comfortable to be happy," she added.

But students were perhaps most enlightened by their day-to-day interactions with the Cuban people.

"I think since the embargo people have forgotten Cuba and see it as an alien place, but that is not the case at all," said Reitsma.