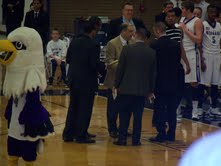 The Niagara University's men's basketball team, despite its recent loss to Loyola, leads the Metro Atlantic Athletic Conference (MAAC) thanks to a recent seven-game winning streak.

"I would be lying if I said I expected that; I knew we could win every game, but I also knew we could lose every game and that's why I think we're doing well," Niagara University's head coach Joe Milhalich said of the seven wins in a row.

After being appointed head coach in 1998, Mihalich has since won two MAAC championships.

"This year is more like 2007 (when NU won its second MAAC championship), because we've surprised some people," he said. "But we still have a long way to go. It's more like 2007, where the expectations weren't so high."

"Every team is different in talent, size, and style," Michalich said. This team has "its toughness about it and it has a good attitude."

Mihalich continues to give credit to the players for playing as a team (and for their school). He thanked the fans, too.

"We want all the Niagara University students and fans to know that they are a big part of us," he said. "That when we come into this gym we're playing not just for the team and for our families, but also for all of Niagara University, all of our fans and all of our students. We feel like we're representing them. It is an honor and a privilege for us to get to represent them. So when we're out there, we play for the name on the front of our jersey, not on the back, and that is Niagara. We're all Niagara - fans, students - we're all Niagara! We feel a sense of obligation to do our best for them and for everyone."

The Purple Eagles have six conference games remaining. Their next one will be against Rider on Feb. 7 in Lawrenceville, N.J.