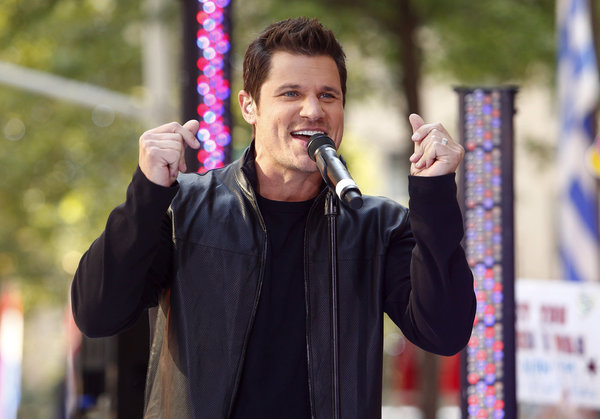 Nick Lachey appeared with 98 Degrees this past summer on NBC News' "Today" show. He's set to host "The Winner Is." (photo by Peter Kramer/NBC)

Dueling contestants to be judged by a studio audience; before hearing their fate, singers must decide to accept a cash buyout to leave the competition or continue the game

The contestants will come from all popular styles of music - R&B, country, gospel, pop, opera and hip-hop, among others. They will be judged by a studio audience vote as they compete for a huge cash prize.
In addition, auditions for the new show will be held in Raleigh, N.C.; Houston; Seattle; and Philadelphia (more information below).

The show comes from Talpa Media USA, Inc. (NBC's "The Voice"). Creator John de Mol will executive-produce along with Craig Plestis ("Deal or No Deal") and Stijn Bakkers ("The Voice").

"Nick is a versatile, seasoned host and we are thrilled to be working him," Telegdy said. "With Nick at the helm on air and an original format from Talpa that includes surprising and competitive twists, viewers are sure to be immersed and entertained."

On "The Winner Is" singing contestants from all across America are given the chance of a lifetime to win a huge sum of money in record time. Each duel sees two singers go head to head to give their ultimate performance. After each singing showdown, the studio audience votes for the best performer. Losing a duel means a player is out of the game. But before the winner is revealed, the players must test their nerves by resisting a cash offer to leave the game for good. If they're confident they performed better than their opponent, they can await the audience vote to see if they've made it to the next round and one step closer to the ultimate grand prize.

In the grand finale, eight episode winners continue to compete until just two amazing singing contestants remain. Then the two finalists must make a crucial decision. After their performance, they each get the chance to walk away with tens of thousands of dollars or they can risk that huge amount of cash by awaiting the audience vote for the chance to win a life-changing sum of money.

The contestants on "The Winner Is" need to be certain of their talent, but should never underestimate their opponents as they're literally asked to put their money where their mouth is.

Lachey, a multi-platinum recording artist, actor and television personality, first rose to stardom as the frontman of the popular band 98 Degrees, selling 10 million albums worldwide and charting several Top 40 hits. Lachey later went onto star in "Newlyweds," one of MTV's most successful shows in the network's history. In 2003, he launched a successful solo album career for which his second record "What's Left of Me," went to No. 2 on the Billboard Top 200 Albums chart.

Most recently, Lachey hosted three seasons of NBC's "The Sing Off," which aired in primetime in December of 2009, 2010 and 2011, respectively. In July 2011, he hosted NBC's star-studded "Macy's 4th of July Fireworks Spectacular" and has co-hosted "Live with Kelly" alongside Kelly Ripa on several occasions throughout 2012.

Audition sites for the show and relevant information are listed below: