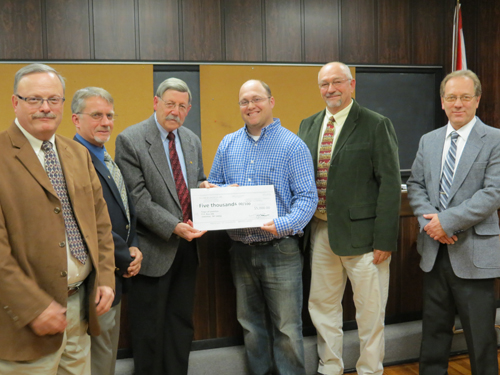 It won't be in Buffalo, where First Niagara Center will remain dark at least a little longer (thank you, NHL lockout), but in the Village of Lewiston. The Academy Park ice rink will open to the public on Saturday, Dec. 1.

On Monday, village trustees presented Town of Lewiston Recreation Department Director Mike Dashineau with a check for $5,000. The money represents the village's contribution to the town-leased rink.

"We really appreciate what the town's doing in our little village," Mayor Terry Collesano said during the Village Board meeting. "And the residents are equally satisfied and happy with what's going on with the ice rink. So we would like to join in and become a partner, so to speak. So this, we hope, will help you out immensely."

At roughly 45-by-120 feet, this year's rink is about one-and-a-half times larger than the one used last season. It's perched on a dirt mound above the Academy Park field, nestled between the DiMino Tops bandshell and the green bleachers.

On Tuesday, Dec. 4, guests can learn to skate and pickup ice safety lessons from 4 until 6 p.m. Open skating follows, from 6 until 8 p.m.

Skates can be rented inside the warming tent for a nominal fee.

•The Village Board approved the partial closing of Center Street on June 22 and 23, 2013, for the eighth annual GardenFest, presented by the Lewiston Garden Club. Portions of the road will be closed from 5 a.m. Saturday until 6 p.m. Sunday. The festival runs from 10 a.m. to 5 p.m. both days.

"It went very well, and the weather held up for us, and we had a good crowd. It was quite popular for us," said Lewiston Garden Club member Barbara Carter.

Proceeds from GardenFest benefit the Village of Lewiston.