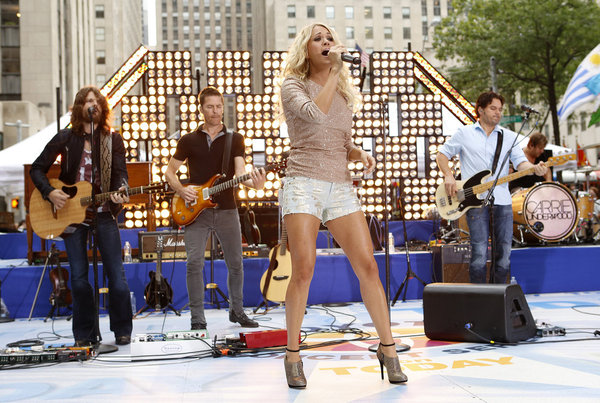 Superstar Carrie Underwood will continue her critically acclaimed "Blown Away Tour" in 2013, with special guest Hunter Hayes. This includes a stop in Buffalo at First Niagara Center on March 26 (7 p.m.)

"The Blown Away Tour" is presented and hydrated by vitaminwater and promoted by AEG Live.

A donation of $1 from each ticket sold on the North American leg of "The Blown Away Tour" will support Red Cross disaster relief. Every year, the American Red Cross prepares for and responds to nearly 70,000 disasters across the U.S. This donation will help the Red Cross provide shelter, food and emotional support for those in need after a disaster. Proceeds from Underwood's Canadian concerts will be donated to the Canadian Red Cross.

Underwood's "Blown Away" album made history this spring by debuting at No. 1 on Billboard's Top Country Albums chart, making her only the second country artist in the 47-year history of the chart to have each of her first four albums debut at No. 1. "Blown Away" also debuted at No. 1 on the all-genre Billboard 200 chart, making Underwood only the second country artist in history to have three consecutive albums debut at No. 1. "Blown Away" became country's best-selling digital album debut since 2010 and has now sold a million copies. The album's first two singles, "Good Girl" and "Blown Away," both reached No. 1 status, earning her a total of three weeks atop the country airplay charts in 2012, more than any other female country artist this year.

Later this week, Underwood and Brad Paisley will co-host the 46th Annual CMA Awards (they're hosting for the fifth time). Underwood is nominated for Female Vocalist of the Year. The CMA's will air live from Nashville's Bridgestone Arena on Thursday, Nov. 1, at 8 p.m., on ABC.

Ticket information will be announced at a later date. For more information, visit http://www.firstniagaracenter.com/eventX.cshtml/47.