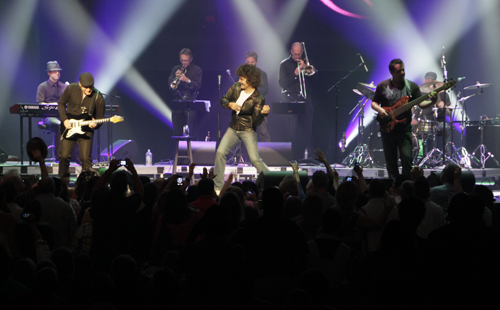 Look out Niagara Falls: Gino Vannelli is coming to town

Indeed, for some fans it will be like Santa coming to town. After 35 years, Gino Vannelli still delights fans with sold out shows at multiple venues worldwide. He is performing three shows at The Bears Den inside The Seneca Niagara Casino & Hotel on Oct. 5 to 7.

This year's show will feature some songs from "Canto," released in 2003, showcasing some of Vannelli's best work, as well as some new material that he has worked up.

Vannelli has a amazing background in all aspects of music. This multi-talented singer/songwriter/composer/conductor from Montreal is from a musical family. His father was a "Big Band" musician. Attending McGill University for music theory, Vannelli mastered voice percussions, piano and guitar. Paying his dues and learning the industry, Vannelli debuted in 1974 with A&M Records with the single "People Gotta Move." After reaching No. 22 on the Billboard chart, Vannelli appeared on "Soul Train" in February 1975. It was his TV debut.

Vannelli has performed globally with some of the music industry's best, including Stevie Wonder and Darryl Strummer. His 1978 single "I just Wanna Stop" reached No. 1 in Canada and No. 4 on the Hot 100 chart, and earned him a Grammy nomination. He is, perhaps, most known for his Top 10 1985 hit "Black Cars."

Donald Felice:What is it about Niagara Falls that brings you back year after year?

Vannelli: The location allows people from a general area to congregate together like family. The accommodations are first class.

DF: Who were your musical influences?

Vannelli: (As) a child, I was subjected to classical, jazz, R&B, rock, gospel, listening to the Beatles, The Who, Zeppelin, Pink Floyd. Then also Jazz legends Miles Davis, Coltrain. Then as the fusion came like Herbie Hancock, it was intriguing to listen to. In my darkest moments my heart belongs to classic impressionistic music; its a very deep music.

DF: What is the one thing about the road you would change.

Vannelli: They should have a line for artists only. The travel at airports. It gets old taking off your boots.

DF: Performing all over the world, which one county stands out?

Vannelli: The Ukraine is a glorious place, and the fans show so much love and support, as do all my fans.

DF: As a songwriter, where and what do you look for when writing a song?

Vannelli: That question came up in a global master class in Portland. It's a journey. You gather information, and do background of theory, and you listen to the musicology, the beat and rhythm, with understanding of being clear on your writing - using a direct approach to your writing, to know the sound you are trying to reach in the end product. These days, musicians need to keep a close eye on what's happening in the industry, the latest gear for technical affects. It goes so deep, it's changing all the time. But we need to know the sound we are trying to reach; (it) must be clear in your head. As a writer, it's up to you to reach that sound. To have a focused theme for when the audience listens to you. (When you) hit them in a certain way, it gives them a little pause - a little feeling like, "ah hah."

DF:Like when you hear a good note and it makes the hair on your arm stand?

Vannelli: Yes, and it's strange how we all hear that in all levels; (it's) a compass for truth. When the audience hears a good song and a good lyric it hits 'em and most people respond to it.

DF: "Canto," released in 2003, has been one of your finest releases. Critics say it's perhaps your best work. Do you agree and why?

Vannelli: It was a tour de force for me: A challenge singing in four languages (English, Spanish, French and Italian); to write the lyrics to make it work; to translate the lyrics. As I was writing the English, I had an Italian lyricist with me. ... When you try to translate some things in certain language, they are different, so it's not the same thing you are trying to say in the lyric. This was a major challenge, and I wrote all the songs and I orchestrated with Glen Morley all the material. I found that all my listening and my past studies of theory and all that came in handy and, within a month or two, I knew the sound I was trying to reach to make the record, so I put together The Northwestern Orchestra to record the record with me.

DF: So, you agree that was some of your best work then?

Vannelli: Yes, I have to agree. (In Niagara Falls) I'm going to perform three different songs over the three shows form "Canto," including "Weight on My Shoulder," and a never before performed on stage (song) "Last Days of Summer."

DF: Is there any artist you would like to work with given a chance?

Vannelli: Yeah, jazz keyboardist Joey Defrancesco and Herbie Hancock. And I currently have some things hanging around and waiting to do, so I hope they want to work with me.

DF: As a junior in high school in 1985, riding my bike listening to some of my music in my Sony Walk Man, back then "Black Cars" was something I listened to. Did you own any black cars and what was your inspiration behind the song?

Vannelli: (Laughs) I've had five black cars. It's a song about a lady that I use to observe walking up Centic Boulevard, hidden behind her dark glasses, scarf and fur coat, waiting to be discovered. I thought it was worth writing about her. She was like my black car that I could really never make look perfect looking in the sun.