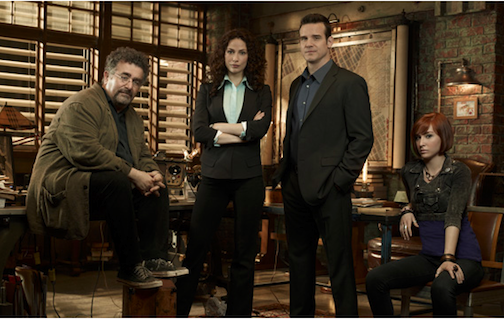 Good news, "Warehouse 13" fans: "Our show is not called 'Giant Chasm in the Ground 13.' It's called 'Warehouse 13,' so obviously they're going to figure out a way to bring the warehouse back," says star Saul Rubinek (Artie).

In other words, the season three cliffhanger will be resolved. ... But not overnight - and not without consequences.

When we last saw our heroes, special agents Pete Lattimer (Eddie McClintock) and Myka Bering (Joanne Kelly) had failed to prevent the warehouse of historical (magic?) artifacts from exploding. Their handler, Artie, meanwhile, had failed to prevent tech guru Claudia (Allison Scagliotti) from exploding (or, plotting revenge) in light of the death of Agent Steve Jinks (Aaron Ashmore).

"We've had artifacts," Rubinek says. They all have unique powers that make the impossible possible. But, "We've known that there's a downside to using them. There are always consequences. And what the writers decided was that there had to be some consequences that were irrevocable. There were consequences that would be so dark that ... it wouldn't just be easy (to right last season's wrongs)."

Now, that's not to say "Warehouse 13" is turning into a hard-core drama. The show's recipe of action-adventure-comedy-chases will continue.

The "dark matter" doesn't necessarily change the show tonally, McClintock says, "but certainly there will be fallout from the use of artifacts that we cannot take back. You know, that stay with everybody. The change, it changes everyone permanently.

"But from week to week you still have fun ones, and it stays light. But definitely, like Saul said, we don't want the show to become predictable, so you have to be able to know that we can't just fix everything every time."

"Warehouse 13," to its credit, has bucked the "three seasons in the can, time to kick into cruise control" trend that we see in so many successful series. It doesn't take entire months off, unlike other cops-and-robbers-type shows. Week to week, "Warehouse 13" is fun to watch. Its stories are interesting, and showrunners artfully tie each week's theme into a grand picture - one in which good guys, bad guys, science and sarcasm fight for control of the world.

"There is something that I think is called 'series-itis' that you have to be careful of," Rubinek says. "The danger is when you're doing a show ... for actors doing any series, is that the test is not how quickly the crew can get home and how quickly you can do things, although we do want to do that. (The test) is you really have to keep challenging yourself in a series. You have to keep things alive."

Fortunately, the "Warehouse 13" set has McClintock around to ensure no one's creativity is stifled.

"We're a show that other crews envy, because there's no prima donna," Rubinek says. "There's just hard work and a lot of fun, a lot of which is because Eddie really keeps things light and entertaining. I call it his 'buffoonery.' But it's true and we do have a wonderful time together."

Naturally, "Warehouse 13" is a guest star-heavy series. To a man, the actors BTS and colleagues interview all rave about McClintock's on-set demeanor.

"I've done probably 60 guest spots on 27 different television shows, so I know how uncomfortable it can be and how difficult it can be to show up on a show that is already established," McClintock says. "It's basically like showing up at somebody's door with your sleeping bag and going, 'I'm going to be lying in your living room eating potato chips in my underwear for the next seven days, so I hope that's cool with you.'

"Like we've said before, we work 15, 17 hours a day. There are dynamics on the set that as a guest star you don't know about. You don't know who's feuding with whom, and who's (dating) whom, and ... so for me, it's just I love to try and make people feel comfortable. I think it makes for a better work environment. I think it makes for a better show. And, it's just the person I am.

"I'm always so thrilled to see people come on the show. And I'm just so proud. 'Really? You want to do our show? Our little show? You want to be on our show?' So, I'm always flattered that they want to come and work with us."