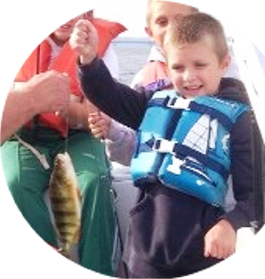 Before iPads, cell phones and Facebook, fishing filled our time

Occasionally I bump into a long time friend of mine and we get into some great conversations, and a few evenings ago this was no different.

Bob Rougeaux and I are natives of Niagara Falls, and now we both live in the Town of Porter. We both went to Sacred Heart grade school at the same time and both had similar after school passions. We didn't have anything near what occupies kids today, like all those sophisticated electronics. We had tube radios, 12-inch B&W televisions, and yes those TVs had tubes too, and test patterns that came on at midnight. Our telephones were the rotary dial kind that kids of today have trouble trying to operate, and big hands and little hands on our watches. Does anyone know where there is a pay phone on a corner somewhere today?

Friday nights were the big night for TV in my neighborhood with the Friday Night fights; first, wrestling was on TV from Memorial Auditorium in Buffalo, with Yukon Eric, Gorgeous George, and a guy named Farmer Don, who always brought a pig with him into the ring. One guy had a ring name like, "The Little Flower of Italy," a bad guy. The next program on Friday nights was boxing. I can remember some legends like Jersey Joe Walcott, Sonny Liston and Joe Louis "The Brown Bomber," because they were my father's favorites, and so was Gillette Blue Blades, Pabst Blue Ribbon Beer, and the cameo girl "Ginny." Bet you some of you old guys remember the name "Willie Pep."

Times sure have changed, but basic fishing remains the same as it ever was. Back then, all that was ever needed was a stick, a hook, some line, and that could even be a piece of string, plus a weight to bring it all down to where the fish were. A bobber could be just a twig lying around the creek side or an old bottle cork you found lying around the house. Sometimes our weights would be an old spark plug or a nut that was lying around the garage.

Bob and I would fish Hyde Park Creek for bullheads and rock bass with our "equipment." It was never called it fishing tackle because that is what they sold in stores like Noah's Ark and Western Auto, or Behren's Tackle Shop on Pierce Avenue. There was no money for that.

Bob and I fished when we were the same age, but did so separately. Bob fished all around Hyde Park Lake and I fished the creek at the "rocks," which were two big rocks at the edge of the creek right near greens number 7 on the golf course at that time. We never fished together because I didn't know that he liked fishing after school and on Saturdays; turns out neither did he.

Sometimes worms were picked for bait out of the back yard or we packed some "Wonder Bread" as Bob called it. Yep, Wonder Bread, the kind that "builds strong bodies 8 ways." The bread had to be fresh so you could roll it up in tiny balls and it would stick on your hook. Two or three slices were all you would need for half a day. Toss that tasty treat out and there would be an underwater battle between the bullheads and the rock bass. Big bullheads were kept to bring home and brag to the neighborhood kids what you caught. How cool is that!

My father would put water in our concrete stationary tub in the basement for my fish. They would keep for a few days and eventually we would give them to Mr. Say, a neighbor two doors away, who would eat anything that could swim including eels.

Those were the early days of fishing for us and eventually we graduated into bigger things, like getting new rods and reels, along with real sinkers and hooks with no rust. Boats came later. Then we needed tackle boxes to keep all our stuff in. Through our growing years and later, it was a rare occasion Bob and I would see one another because raising families, paying mortgages, and things like that occupied much of our time. But it was agreed, we always managed to find time to fish through those years.

In our conversations Bob would start rattling off all the places in Ontario, Canada, he traveled to catch walleye. "Walleyes like that," as he stretched out his hands showing me how big, and his eyes almost popped out of his head with his expressions. You would swear he just caught it at that moment while talking about them.

Bobcaygeon, Ontario, a small community located on the Trent-Severn waterways in Ontario, Canada, was at the top of his list. Then his memory would explode and he'd start rattling off the names of the guys he traveled with. Names like Obie Brown, John Smeal, Fire Chief Ted Forrester, among others. The others I couldn't remember fast enough. All those were fellow Niagara Falls firefighters of which Bob Rougeaux, now retired, had worked with.

Eventually Bob graduated into the salmon fishing scene on Lake Ontario and stayed for a while. But walleye and some bass fishing are in his heart today, right along with his stick and string and Wonder Bread.

Recently, I went over to Bob's house, hoping to get a picture of him holding a fish up or fishing or something for this story. He said, "don't have any, I never had one, in those days we weren't into picture taking." This reminds me to tell my readers, "don't go fishing without a camera!" You will wish you had.

My short story turned into a long one here. But what I am trying to convey is while I agree with cell phones, iPads, notebooks, all the more organized sports than we ever had and whatever in this new day and age, I also strongly feel there are things in life that many children are missing out on today. And that is experiencing the outdoors and the lifelong memories. There is so much to do, not just fishing or hunting. There is a world full of adventure out there for them, and along with those adventures are memories that will last until the day they pass.

As Bob and I say, as long as we can still stand up and take nourishment, our memoirs will continue to carry us through a lifetime of participating in the great outdoors.

My message is always to take a kid fishing, but how about the elderly? Some of them have no transportation, or even fishing equipment, and would give their right arm to have an opportunity to wet a line once more in their life. Kids and elders both like to feel included; catching a fish can be secondary, just being out there is the great reward.

Your comments and suggestions are welcome. Use your "electronic gadget" and email me at: [email protected] or [email protected]. If you want some fishing hints and updates locally, go towww.OutdoorsNiagara.com.