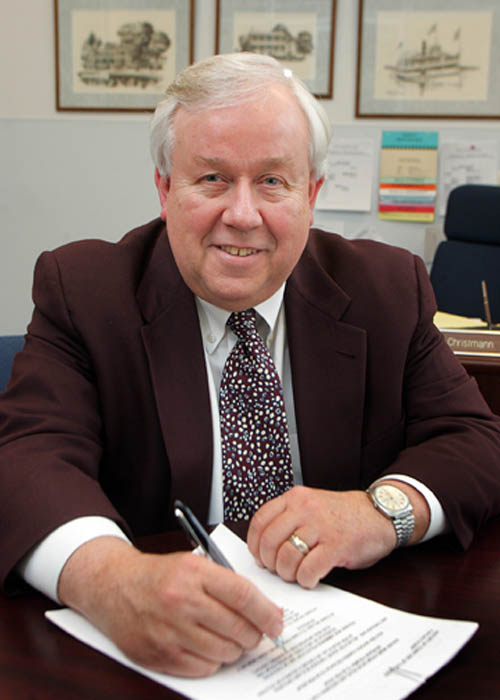 Superintendent Robert Christmann, who announced his resignation from the Grand Island School District effective Oct. 1 during Monday's Board of Education meeting.

Christmann has accepted a position as executive director of the Western New York Educational Service Council, which is associated with the graduate school of education at the University at Buffalo. The council provides support services to school administrators and boards of education throughout Western New York. He will stay on as superintendent while the district looks for a successor.

School Board President David Goris commented that in his 5-1/2 years with Grand Island, Christmann "has provided tremendous leadership. He has moved the district forward and is recognized throughout New York State. We are very proud to have had Bob in leadership service.... The board has already started a search."

In his statement at the meeting, Christmann said, "It is certainly with regret that I make the announcement. This district has made the decision very difficult. I also need to say that in my work at the state level (New York State Council of School Superintendents), one of the things that had to go through my position as president, I had the opportunity to see a lot of districts.... This community is blessed. Every decision (that the board made) was based on the question, 'What is best for students?' "

"(The staff is)... unique and growing more unique ... . It has been a real honor and privilege ... (it's) an outstanding staff. When I came to Grand Island, I did not have a full appreciation of the quality we have in the staff and the community as well. That's what makes it difficult to leave."

"With Joe (Giarrizzo, director of business and finance) and Karen (Cuddy-Miller, director of curriculum and instruction) you could not have created two better people. I would recognize Cheryl Cardone (director of special education) ... it is a very difficult job. Among the three, you have real quality. You have an administrative staff that is second to none.  Jack Burns (director of transportation) ... if you had a draft day and had a free agency, you could not get any better."

Christmann closed his statement with a quotation from "Little Orphan Annie" (and also attributed to A.A. Milne, author of the Winnie-the-Pooh series of children's book): "How lucky I am that makes saying goodbye so hard."

"Certainly I have been blessed and lucky," he said. "I look forward to the time remaining."

The board voted to accept Christmann's resignation and approved a resolution to retain an educational consultant to help with the search.  Watch the district's website, www.k12.ginet.org, for updates on the  search process.

Message from the Grand Island Board of Education

"It is with mixed emotions that we announce Superintendent Robert Christmann's resignation from Grand Island Central School District effective Oct. 1. We thank Bob for his six years of service to our district as well as his continued service to education as he steps into a new role as executive director of  the Western New York Educational Service Council.

"We support Bob in his decision and, simply put, we wish him the best. Throughout his time at Grand Island, he served our district and community well, extending Grand Island's legacy of educational excellence. During this time, his superintendent colleagues elected Bob to serve as president of the New York State Council of School Superintendents (NYSCOSS), a role which allowed him to effectively update the board of education on a regular basis regarding state matters that could affect the district. They also elected him to represent NYSCOSS on the Governing Board of the National Superintendents Association (American Association of School Administrators).

"It is under his leadership, that the district and community:

•"Assisted in moving the district into the top ten academically as determined by Buffalo Business First;

•"Hired eight district and building level administrators, more than 40 new teachers, and more than 30 support staff as well as increased community and staff involvement in the selection process;

•"Averaged more than 90 percent high school graduation rate, including 95 percent this past school year; and

"We fully expect Bob will continue to work with the district as an interim superintendent through the fall. As a board, we have acted proactively and commenced the search for a new superintendent whom we expect to start by Dec. 31, 2012.

"We will engage the community as we work though this critical process. Please watch the district website at www.k12.ginet.org and Facebook page at www.Facebook.com/GIcapitalproject for updates as we move forward.

"If you have any questions or concerns, please let us know. We can be reached at [email protected]."