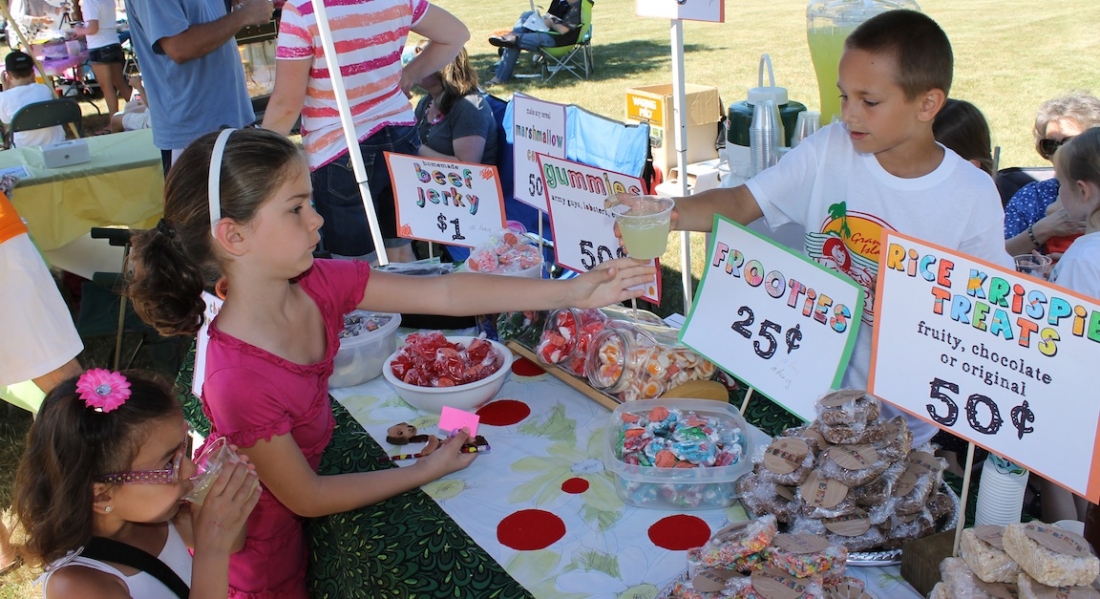 Scores of Island children took over the Town Commons Saturday in the 16th annual display of youth capitalism.

KidBiz, part of the Grand Island Chamber of Commerce's Island Happenings, drew 67 businesses run by more than 110 kids selling products and services among the adult businesses that comprised the chamber's Business Expo.

The businesses interweaved with the KidBizzers, said Jim Sharpe, the chairman of KidBiz, for two reasons: to give the adult businesses more traffic, and to provide the children's businesses good role models.

The adult businesses, such as Walgreens, Island Pet Lodge, and all the local banks, become like "mentors sitting inside an arena so the kids can say, 'What are they doing over there?'" Sharpe said.

Few are as motivated to sell as the KidBiznesses run by students in grades 2 through 8, a built-in desire, Sharpe said.

"What I love about it is that when people first started talking about the project they say. 'How do you teach kids how to do business? How do you get them excited about the concept to run their own business?" It's easy. Sharpe said his 15-minute presentation about KidBiz in the local schools is followed by half an hour of straight questions from kids.

Sharpe said "they just seem to gravitate to the whole concept and it becomes almost second nature to them."

"And the thing I find fascinating is that the creativity that is out there is all them. The conversations I've had with parents is that the kid comes home just psyched up, saying, 'I'm doing KidBiz.' "

Parents come back saying they're amazed how something so small becomes something so big is some of the minds of these young people, Sharpe said.

Each business paid an $8 license fee that bought a uniform of the day and a business permit to operate the business throughout the five hours.

KidBiz is open to entrepreneurs in second grade to eighth grade.

Sharpe said the parents have supported their kids in letting them tackle the job on their own.

Sam Carpenter was a first-time KidBizzer, but he was a veteran business owner, having run a lemonade stand a year ago.

"Last year I was doing lemonade at my house, but then we moved to a really busy street, so we couldn't sell lemonade as well. So we decided to do KidBiz here," Sam Carpenter said.

Elizabeth Carpenter, Sam's sister, was a first-time KidBizzer also. She said they were selling Rice Krispie treats, gummies, marshmallows and beef jerky, and root beer (fizzy and normal). And, of course, lemonade.

"It pretty much took us a few days of last week and all of this week" to accumulate product to sell, Elizabeth said.

"The first $100 we have to give to our mom," Elizabeth added, to reimburse her for the buying the inventory.

"Sam came home from school and said he wanted to do it, and so we said OK, we'll give it a shot," she said. "When he heard about (KidBiz), he said, 'Perfect. I can do my lemonade stand here. I'll have a captive audience.' He was a fine lemonader in his old neighborhood, and so this seemed like a good fit for him."

Jackie said Elizabeth is a really hard worker who already has a plan for the post-KidBiz meeting after work, a meeting that will probably cover paying off their debt. It's a repayment process that is already under way.

"The first thing they did to start paying back their debt to us was they called their grandparents and their friends and collected bottles and cans and sorted them and returned them," Jackie said. "They got $15 worth of bottles and cans. That was cool. I was impressed with that."

Sam, age 8, and Elizabeth, age 6, are learning the value of money at an early age, Jackie said.

"I think it's healthy for them just to understand the value of it. They're not spending it on junk, and they understand that you have to work hard for it."

Georgia Giogas and Joy VanderMey sold, among other things, baklava at Fireflies. Georgia's mom made the Greek treat, a tasty mix of honey and sugar, walnuts and phyllo.

"And it's very tasty. That's what I say," Georgia said.

"It feels pretty good, actually," Georgia said of technically being her mom's supervisor for the endeavor. "I'm nice, I don't really boss around people. I just tell them what to do and how to do it."

She also enjoyed the sweet taste of sales success, as business was doing well Saturday.

"I really like it. It's fun getting money and fun to talk to people and sell," she said.

Brienne Westfall of B&C Boutique sold her jewelry with her partner, Camryn Fisher.

"This is really fun working with your friends in your own little business," Westfall said.

She's been making product since Christmas.

"This whole week I've been working pretty much overnight to make all my jewelry."

The duo took donations for the city homeless as well.