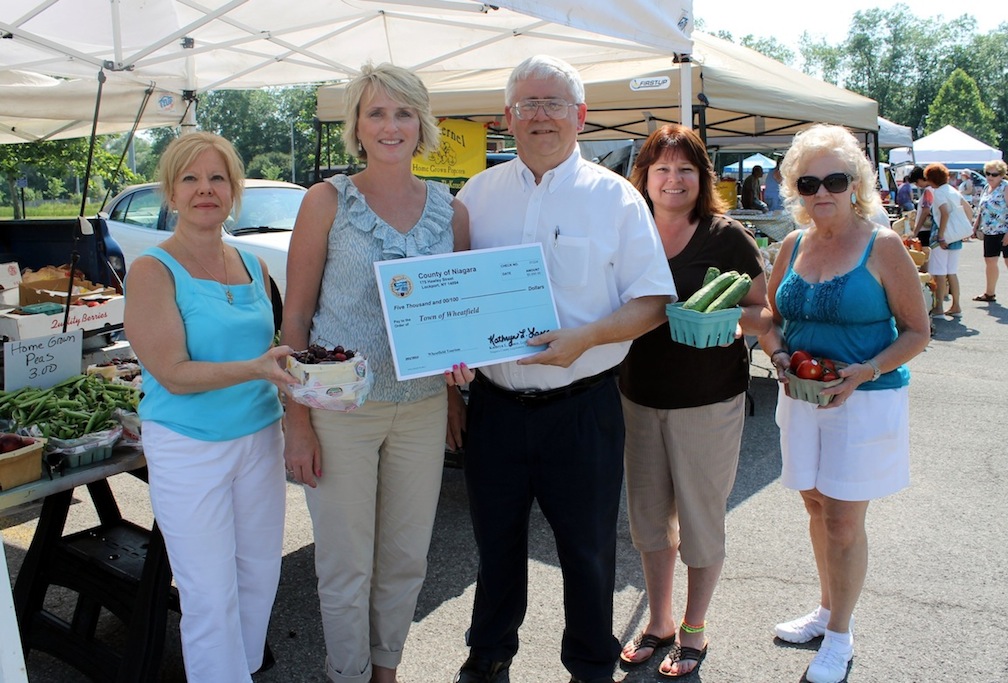 Wheatfield Town Clerk Kathy Harrington, left, and Wheatfield Town Supervisor Bob Cliffe accept a ceremonial check for $5,000 from Niagara County Legislator Kathryn Lance to fund a summer farmers market and a Fourth of July concert in the town. Also, Francine Boore and Diane Retzlaff display some of the produce available for sale at the weekly Wheatfield Farmers Market.

A freshman lawmaker has secured key funding for events in her hometown this summer - including a popular farmers market that will bring fresh produce and baked goods to local residents on a weekly basis.

Under Lance's resolution, the county is turning over $4,000 to Wheatfield's town government to run the Wheatfield Farmers Market and $1,000 for a planned Fourth of July concert.

"The Wheatfield Farmers' Market is important to both our residents, who appreciate the opportunity to enjoy fresh farm goods, and to our local agricultural producers, who count on opportunities like this to sell their produce," Lance explained before turning a county check over to Supervisor Bob Cliffe, R-Wheatfield, and Town Clerk Kathy Harrington, R-Wheatfield.

The Wheatfield Farmers Market is held behind Wheatfield Town Hall, 2800 Church Road, Wheatfield, Wednesdays from 3 to 7 p.m. through Oct. 17.

In addition to the Farmers Market, Lance also secured funds for Wheatfield's planned Independence Day concert. The town has contracted with ROAR84, a local '80s throwback band, to play the event.

ROAR84's covers draw heavily on 1980s new wave and pop music, featuring such memorable hits as Nena's "99 Luftballons," A Flock of Seagulls' "I Ran," and Men Without Hats' "Safety Dance."

"Wheatfield is a growing community, and a lot of that growth has been young families," Lance explained. "Our town leaders wanted to provide a positive outlet for them this summer - and this is a really family-friendly concert. I was glad we could help at the county level."

The concert will be held at Oppenheim Park from 6 to 9 p.m., with fireworks at dusk.