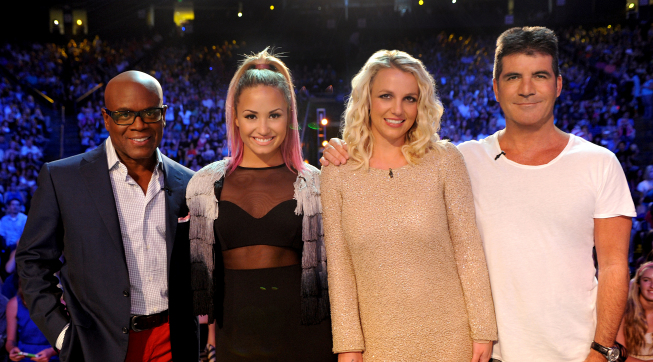 Pictured from "The X Factor": L.A. Reid, Demi Lovato, Britney Spears and Simon Cowell on the set of the hit FOX series. (photo by Ray Mickshaw/FOX)

Fans of "The X Factor" and Pepsi are being offered the ultimate opportunity to win a trip to attend a taping of "The X Factor" "Boot Camp" episodes with judges Simon Cowell, Demi Lovato, L.A. Reid and Britney Spears. "The X Factor" fan experience Twitter contest runs through Tuesday, July 10.

Fans can enter the contest by: (1) following @pepsi on Twitter and allowing @pepsi to follow them; (2) registering their Twitter handles into the contest by visiting www.TheXFactorPepsi.com; and (3) tweeting why they are the biggest "X Factor" fan. All participants must include the hashtags #topfan, #xfactor and #mycontestentry, as well as Twitter handles @pepsi or @TheXFactorUSA, to be considered an eligible entry, and fans must accept official rules. Tweets will be judged based on originality and relevance.

Two winners will be chosen by Pepsi, FOX and show producers to attend the taping of the "Boot Camp" episodes. While at "Boot Camp," the winners may have the opportunity to film video content to document their trip, which also may include interviews with select "The X Factor" production staff members. Video equipment will be provided by contest sponsors.

"The X Factor" returns this fall offering a departure from other singing competition series. The first time contestants audition for "The X Factor" judges, they will do so in front of an audience of thousands - raising the stakes and increasing the pressure to impress not only the judges, but also a potential legion of fans. This will be the ultimate test to prove they have the vocal ability, charisma and stage presence that it takes to win an unprecedented $5 million recording contract with Syco/Sony Music.