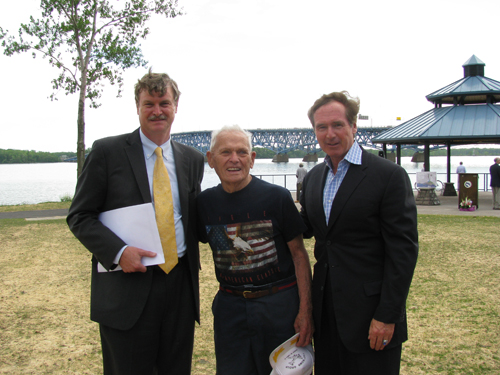 Another bit of waterfront property was kept open to the public as LaSalle Waterfront Park was officially opened Monday in Niagara Falls.

Located on Buffalo Avenue near 66th Street with the north Grand Island Bridge arching behind it, the park is the last remaining bit of open property along the Niagara River in LaSalle.

The old Century Club site had been destined for commercial development, but was saved for public access and recreation, thanks in part to the dogged lobbying of 92-year-old, lifelong LaSalle resident John Mikula.

At Monday's ceremony, Mikula joined elected officials, members of the LaSalle PRIDE community organization and representatives of the Western New York Regional Economic Development Council in the new park's gazebo and was presented a proclamation by Niagara Falls Mayor Paul Dyster. The proclamation named him an "outstanding citizen of Niagara Falls."

"Not everyone can afford to live on the waterfront," Dyster commented. "We want to make sure to give everyone in the community the opportunity to enjoy it."

Mikula, a World War II veteran who still brags about swimming from LaSalle to Grand Island as a youth, had watched the riverfront in LaSalle being snapped up for private and commercial development over the years. After years of prodding public officials about saving some of the waterfront property for the public, the Niagara River Anglers member said he was glad to have lived long enough to see his dream come true.

As people wandered along the park's paths with their children or dogs and enjoyed a community picnic as part of the celebration, he commented that he planned to be spending time this summer in the park and invited people, young and old, to visit the park, and if they see him there, say hello. His hearing might not be the best any more, "but I'm doing pretty good for 92 years old," he said.

The park received $97,440 from the Department of State Local Waterfront Revitalization Program and $850,000 from the Niagara River Greenway. The final phase of the park's development is being supported by a $102,440 award received as part of Gov. Andrew M. Cuomo's Regional Council initiative.

The park currently includes a fishing dock, play area, rehabilitated comfort station and a storage/concession building. City Senior Planner Tom DeSantis said Phase II will hopefully be completed this year and will include benches, picnic tables, grills, signage and more landscaping, fencing and lighting, and some finishing work on the dock.