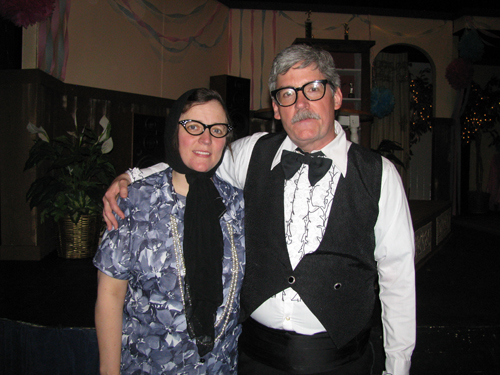 Laugh out loud with Lottie and Bernice

Who would have thought that two old Polish ladies named Lottie and Bernice would become the toast of North Tonawanda?

The two characters developed by Wheatfield resident and Starry Night Theatre playwright L. Don Swartz sold out almost all the performances of "Regrets Only!" at the Ghostlight Theatre on Schenck Street in North Tonawanda even before the play premiered on May 3.

Only a few individual seats remain for the next two weekends. And this is Lottie and Bernice's fifth time out!

"I honestly thought the interest would start to wane," Swartz said of the two feisty characters who have brought in the top box office hits in the theater's 40-year history.

They first appeared as minor characters lost in a cemetery in Swartz' "Danse Macabre" performed in 2001.

"Lottie and Bernice. That's all people talked about afterward. They kept saying we need to see more of them," Swartz said.

In "Regrets Only!" Lottie and Bernice and the rest of the cast are leaving their audiences chuckling, howling and even crying with laughter as the duo invades a traditional Western New York wedding. If laughter is the best medicine, Lottie and Bernice are the aspirin of life.

Debby has been acting in the theater's productions since fifth grade. Swartz met her when he was hired as artistic/executive director in 1982. At cast parties, she and Joann would do a funny routine based on their Polish relatives and ancestors.

"I thought, one of these days, I'm going to put this in a play," Swartz said.

Swartz, who is not Polish, said the representation of Lottie and Bernice is lovingly done, not mean. "It's not picking on anybody."

The laughter comes when people see themselves or friends and relatives in the exaggerated characters and situations.

Forceful and opinionated, Lottie and Bernice know how the world should act, and they're not afraid to say so - loudly.

They arrive early at the wedding reception to claim the best seats, disdain the new tradition of wedding cupcakes, taste them, proclaim them "dry," then go back for more. Silverware and more disappears into their commodious handbags.

This production also brings back and features more prominently the "odd couple" Hal (played by Swartz) and Sal (played by Swartz' brother Jesse Swartz) as reception hall employees trying to avoid working too hard. They open the first act with some "guy talk."

"This is what guys talk about - absolutely nothing," Swartz said.

In "Regrets," Hal and Sal have their first real interaction with Lottie and Bernice. Mayhem ensues in the form of a Keystone Kops-like chase when Sal dares the timid Hal to get Bernice on the dance floor.

Speaking of dancing, the arrival of the wedding party leads off the second act with more laughter as the cast takes the wedding custom of making the first dance a kaleidoscope of different dance styles to comedic levels with some of the worst traditional dances like "The Hokey Pokey," "The Bunny Hop," "The Chicken Dance," and of course, "YMCA."

Swartz said another edition of Lottie and Bernice is not out of the question.

"So long as the audiences still enjoy it, it would be silly for us not to keep doing this," Swartz said. "We know how silly it is; we laugh all during rehearsals. We have just as good a time as the audience does."

Lottie and Bernice first-timers at the performance commented about how they would have liked to have seen the earlier plays. This also could be a possibility, but in the future, as it is the troupe's policy not to repeat a show, except Christmas shows, within 10 years.

Unfortunately, although shows are mostly sold out on May 11, 12, 18, 19 and 20, except for those few individual seats, Swartz said his group won't be able to extend the run. They're busy getting ready for their annual fundraiser, a basket raffle to be held Saturday, June 2, at the Knights of Columbus Banquet Facility, 755 Erie Ave., North Tonawanda. Admission is $5. Doors open at noon, with baskets called at 2:30 p.m.

For more information on the Starry Night Theatre group at the Ghostlight Theatre, go to www.starrynighttheatre.com. "Regrets Only!" tickets are $14 general and $12 for seniors, students and veterans. To see if you can snag a ticket, call 716-743-1614.