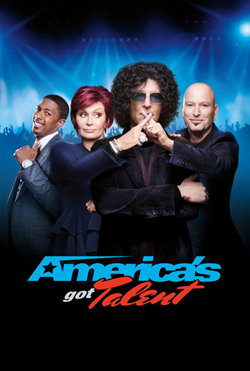 NBC's "America's Got Talent" and its producers have again collaborated with YouTube, and for the first time, show sponsor Snapple, to allow talented acts from across the country the opportunity to audition online for their shot at stardom and a million-dollar prize.

The online auditions will be voted upon by the viewers in the YouTube Snapple episodes airing in August on NBC, and the top 20 acts will compete at their shot at stardom for sought-after slots in the semi-final round of the competition show. Those selected to enter the semi-finals will then face the AGT judges panel: new judge Howard Stern, who joins fellow judges Howie Mandel and Sharon Osbourne.

Following the June 1 deadline, producers will select 20 acts for the YouTube community to view and vote for their favorites. The No. 1 YouTube act with the most qualifying votes will gain a place on the YouTube Snapple quarterfinal performance episode. Eleven other acts found on YouTube will also perform on the special live show and will be competing for slots in the semi-finals.

Much like season five finalist Jackie Evancho, who became a worldwide singing sensation after her online submission led to her competing on the No. 1 summer series, hopefuls once again can audition online by submitting their videos via the YouTube/Snapple audition program.

Now through June 1, U.S.-based acts of all ages can upload their audition videos via the "America's Got Talent" Audition App, or at www.youtube.com/americasgottalent, or at www.nbc.com/agt or the Facebook fan page at www.facebook.com/nbcagt. All submissions are subject to the terms and conditions of the competition.