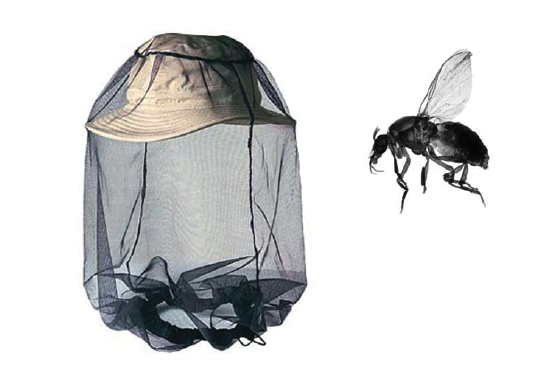 The dreaded black fly. A head net should be worn with a wide brim hat as shown, to keep the net away from your skin.

Enjoying the outdoors sometimes requires precautions, and here is one of them.

If you have never experienced a black fly bite, try and avoid any and all. Black flies are a tiny fly about 1/8-inch long with clear wings that can take a tiny bite out of you, and you wouldn't even know it until the itching starts, and shortly after that, the swelling starts. If you want a good idea of its size, the body is about twice the size of the dot at the end of this sentence.

The places they like to bite you most are moist areas such as the corners of your eyes, where the moisture draws them, or along the brim of your hat where you sweat, shirt cuffs, pant cuffs, belt lines, behind the ears, and hairlines, but they won't stop there if they are hungry. They will attack your skin anyplace you are exposed because they aren't too fussy. I have seen people that got bit in the corner of their eye, and the eye closed from swelling.

The ladies of the species are the only ones that will bite; they are the bloodsuckers - bloodsuckers of humans and warm-blooded animals. When they bite, that tiny little female will leave behind saliva in the wound that is an anticoagulant and your itching starts in 10 or 15 minutes. The male lives off the nectar of the flowers, so don't worry about him, but then you can't tell by looking anyway. These flies generally don't bite at night, but other needle nose-pointed mosquitoes will. In fact, a black fly bite starts out looking like a mosquito bite at first, with a small reddish spot, then swelling, then itching and continued swelling, then the itching gets worse and more irritating.

The first time I got bit and got my blood sucked I was on a fishing trip up north, and while parked in a gas station early one morning I got hit. The outside air was kind of cool and inside the car was warm. After rolling down the window, the car started to accumulate these little black bugs. After we got our gas and coffee, we took off down the highway and before I realized it, one of those bugs got me on the back of my hand and I didn't notice it until we were on the road when the itching started. Not realizing what the itch was and unconcerned at that point, I noticed swelling started about 25 minutes later. That's when I found out how a tiny little black bug can cause someone so much pain and suffering. I was allergic to these little critters, and didn't know it. The whole back of my hand swelled and it wasn't until the fourth day of fishing that I could hold a fishing rod properly in my left hand.

Not everyone is allergic to them like I am, but everyone will feel the discomfort at different levels. Woodsmen are the least affected, probably because after so many bites they become immune.

If you are out sitting in a boat fishing on a small body of water and the wind is calm, they'll find you. But if it is windy, you will be safe; they don't like the wind because they can't fly too well in it. Somewhere I read that they can't stand more than an 8 mph breeze, just like mosquitoes can't either. On a windy day, they will stay in the woods and grass, so if you venture into those areas, be prepared because you will stir them up and they will be hungry and take it out on you. In black fly season, you should always wear light-colored clothing when outside (the whiter the better; dark colors are a no-no). Just like other biting insects, the female black flies are attracted to perfumes.

If you live in the country, black fly season is really close, and this year, with the mild winter we had, we could be bombarded earlier than expected. Normal times for their arrival are late May into June, and later. In far northern climates, they could show up into July-August or later. They have a lifespan of about four to six weeks.

You may have seen them swarming above the highway in the evenings because they like the warmth rising up from the road after a day of sunshine. Those little critters are like gnats, or the bigger mayfly, or sand fly, the ones that get all over the front of your car and windshield, and then you have to work like crazy to get them off if you let them dry up too much. All these bugs will swarm and do the same thing. Probably everyone has experienced sand flies when the hatch is on in the summer, especially when driving along the upper river or across Grand Island, and along the lake. City slickers are not immune to getting a spring fling of these black flies, but rarely a heavy dose.

There is no controlling black fly populations, but bites can be prevented/controlled by using commercial insect repellants, and the ones that are most effective are those that have "deet" or the scientific name, "diethyl-m-toluamide." It sounds like an important name, but that is the only one recommended by the experts and me. Deep Woods Off has it, and Cutters insect repellant has served me just fine. Just look on the ingredients, and if it uses that big word, that's the one you want. The higher a percentage it has of that ingredient, the better. If you can find the liquid, buy it, it has more deet percentage and use that on your bare skin. Use the spray for your clothes. Don't get that repellant on your fishing rod or especially on your baits, because the fish despise it.

Avon's 'Skin So Soft' is great for repelling sand flies and mosquitoes, but I found it useless for black flies.

Sporting goods stores sell head nets, and they work. They cover your whole head and your neck; they're a little uncomfortable sometimes, but well worth it, especially when they are swarming around your head. Some of those sporting goods stores also sell shirts that are impregnated with some kind of repellant, and I am told it works pretty well too, especially if you are bothered by mosquitoes.

If you get bit, try not to itch; I'm sure you will, but try not to. I did. I itched so much I broke the skin and as it swelled, the bite oozed, and it took several weeks for that tiny wound to seal up and heal, probably because of that saliva, which is like venom. After getting several bites after my first experience, for relief, I used Benadryl spray to some degree, plus other home remedies like aloe vera or witch hazel, but my wounds still took a long time to completely heal. If by chance you get a whole lot of bites in an outing, it's probably best to consult a doctor.

Captain Mark Vilardo of Kingfisher Charters of Youngstown reports there are plenty of king salmon (chinook) being caught all along the shoreline from the Niagara River to Sodus Point, fishing more than 160 feet of water on average, and using spoons or hard baits off Dipsy Divers and 'Riggers. Vilardo notes that spoon colors doesn't seem to make a big difference, everyone is catching fish. His clients went home with limit catches on both Saturday and Sunday.

The lake trout are still cooperating at the bar in front of Fort Niagara, with some steelies thrown in along with them, but an early moss run out of the river is hampering the lures, causing them to be cleaned off more often.

At this point, we're still waiting for good reports on perch and crappie fishing, but this warmer weather being predicted should turn them on shortly. The spring LOC derby started May 4 and continues all week to May 13. You can sign up 24 hours before the day you fish.

Any comments? Send them to this writer at [email protected] or the Sentinel at [email protected]. Also check out the www.OutdoorsNiagara.com website for up-to-date fishing information, and be sure to check the outdoors forum for postings by others to find out when and where the fish are biting. It is always current, and promise yourself to take a kid fishing this summer!