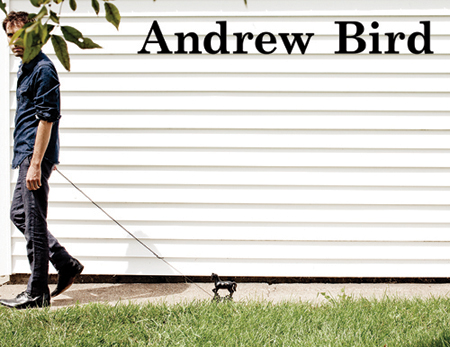 Andrew Bird with special guest will perform at Artpark on Monday, July 16. Tickets for the 7 p.m. show go on sale at 10 a.m. on Friday, April 27. They are priced at $32 reserved and are available through Ticketmaster (including www.ticketmaster.com), by phone at 1-888-223-6000 and at the Artpark Box Office.

The show is a Funtime production.

Bird continues his North American tour in support of his much-anticipated 12th album, "Break It Yourself" (out now via Mom + Pop Music), with performances throughout July and August.

In celebration of the record's release, Bird performs on "Jimmy Kimmel Live!" April 30. He recently appeared on both "The Colbert Report" (stream the video at http://bit.ly/weFuiE) and "Late Night With Jimmy Fallon" (stream the video at http://bit.ly/He1rUR). He also recently performed the track "Near Death Experience Experience" for a special interactive website via La Blogotheque called "Bird en Boucles": http://birdenboucle.com. "Bird en Boucles" has been optimized for the Google Chrome Web browser. It can be downloaded at http://google.com/chrome.

Produced by Bird, "Break It Yourself" was recorded at his barn in Western Illinois near the banks of the Mississippi River. Paired with the album's deluxe CD package is the DVD "Here's What Happened." The 30-minute performance film was shot at Bird's barn during the recording of the album and captures the energy of the room in which the new release was conceived. Footage of Bird performing the track "Eyeoneye" from "Here's What Happened" can be viewed at http://bit.ly/GNr9gi.

Chicago-based film score composer, multi-instrumentalist and lyricist Bird picked up his first violin at the age of 4 and spent his formative years soaking up classical repertoire completely by ear. As a teen, Bird became interested in a variety of styles, including early jazz, country blues and gypsy music, synthesizing them into his unique brand of pop. Since beginning his recording career in 1997, he has released 11 albums - his first solo record, "Weather Systems," coming in 2003. Bird has gone on to record with the Preservation Hall Jazz Band and perform at New York's Carnegie Hall. Most recently, Bird composed his first ever film score for the movie "Norman" (hailed as "a probing, thoughtful score" by The New York Times; available now on Mom + Pop), contributed to the soundtrack of "The Muppets" and collaborated with inventor Ian Schneller on "Sonic Arboretum," an installation at New York's Guggenheim Museum and Chicago's Museum of Contemporary Art.