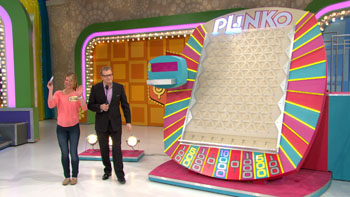 "The Price is Right" welcomes the Publishers Clearing House Prize Patrol for a weeklong giveaway event Monday, April 9, to Friday, April 13 (11 a.m.), on the CBS Television Network. With five days in a row of everybody's favorite "TPIR" game, Plinko, contestants will get a big surprise each day when host Drew Carey informs them that the PCH Prize Patrol is in the house and will double their winnings for every Plinko chip that lands in the coveted middle spot.

Instead of winning $10,000 for each chip, PCH is doubling the amount to $20,000, giving each Plinko player the opportunity to win $100,000.  With Plinko part of the show every day for a full week, players will have an opportunity to win half a million dollars in cash, in addition to the prizes and showcases featured throughout the shows.

"The Price is Right," the longest-running game show in television history, is hosted by Drew Carey.