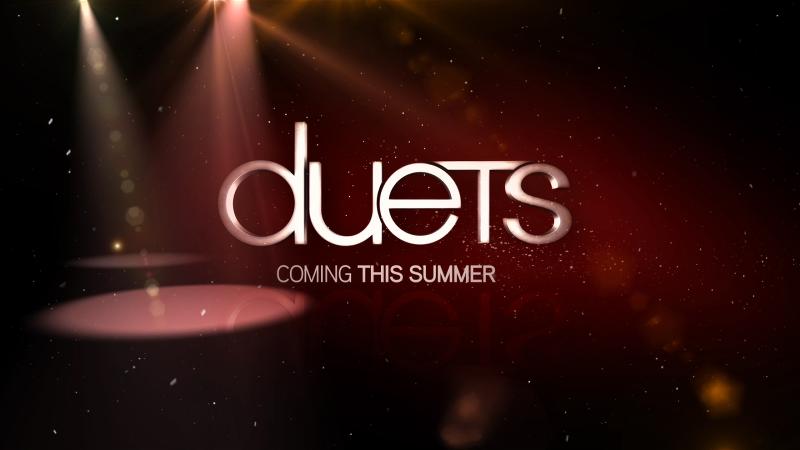 ABC announced today a brand new music competition series, "Duets," starring four of the music industry's biggest superstars: Kelly Clarkson, Jennifer Nettles, Lionel Richie and Robin Thicke. The new series will debut this summer on the ABC television network. For a sneak peek at what the superstars have to say about the competition, click here.

"Duets" is a one-of a kind singing competition that takes the superstars out from behind the judges' panel and onto the stage. Clarkson, Nettles, Richie and Thicke will individually set out on a journey across America looking for undiscovered talent worthy of being their protégés. Ultimately, each superstar will choose two singers to be his/her duet partners. Together, the superstars and their protégés will take the stage each week and perform in front of a live studio audience. In the end, only one duet will be at the top of the charts, and the winning amateur will receive a recording contract with Hollywood Records.

Amateur singers interested in auditioning for the superstars as they travel the country looking for talent can apply online at: www.ABC.com/Casting.

"The simple fact that I get to go out and find two people that I believe in, sing with them every week, and help them accomplish their dream is an amazing thing that I can't wait to be a part of!" Clarkson said.

Since bursting onto the music scene 10 years ago, Clarkson has released five studio albums ("Thankful," "Breakaway," "My December," "All I Ever Wanted," "Stronger"), sold more than 21 million albums worldwide, 10 million albums in the U.S., and has had 10 singles in the Top 10 on the Billboard Hot 100 Singles Chart. She is the recipient of two Grammy Awards, four American Music Awards, three MTV Video Music Awards, one Country Music Association Award and 12 Billboard Music Awards. Clarkson's most recent effort, "Stronger," debuted at No. 2 on both the Billboard Top 200 and Digital Albums Chart. The album is certified Gold by the R.I.A.A. and produced the smash singles "Mr. Know It All" and "Stronger (What Doesn't Kill You)," which mark Clarkson's ninth and 10th Top 10 hit. "Stronger (What Doesn't Kill You)" was No. 1 on Billboard's Hot 100 Chart for two consecutive weeks, marking her third No. 1 on the Hot 100 Chart after 2002's "A Moment Like This" and 2009's "My Life Would Suck Without You."

"The concept of 'Duets' is so fresh because its mentoring is active and participatory. Most of my greatest learning was from singing and playing with other performers throughout my life and career. To have had the opportunity to perform with an established artist would have been so incredible when I was up and coming," Nettles said.

Nettles, lead vocalist for international super-duo Sugarland, has become one of the most popular singer-songwriters in music today. Sugarland has sold more than 15 million records, achieved eight No. 1 singles and has headlined multiple nationwide tours. Nettles has won five ASCAP Awards for her songwriting abilities, and in 2008 received a Grammy Award, and ACM Award and a CMA Award for penning the No. 1 hit, "Stay." She has been seen all over the media spectrum with performances on "Oprah," "The Kennedy Center Honors," "CNN Heroes" and, most recently, performing with Lady Gaga on the "Grammy Nominations Live" concert special.

"I can't wait to get started working with these phenomenally talented young artists. My goal will be to focus on developing true artistry and giving them the tools necessary to be creative artists instead of created artists, and I am eager to pass along a few of the nuggets of wisdom that I have received throughout my 40-year career from my own mentors, such as Marvin Gaye, Frank Sinatra, Sammy Davis, Quincy Jones and Stevie Wonder," Richie said.

Richie is one of the most successful male solo artists of all time, selling more than 100 million records, earning 22 Top 10 hits, winning five Grammys, an Academy Award for Best Original Song, a Golden Globe and a host of other awards. He has shaped popular culture, as his music has served as the soundtrack of several generations around the world. Born in Tuskegee, Ala., Richie was exposed to country, gospel, R&B and classical musical in equal parts, creating a musical foundation so strong that it has vaulted the industry's boundaries and barriers throughout his storied career. Tuskegee is where Richie discovered that he was a songwriter, and the place where he was inspired to write his first two hits, "Sail On" and "Easy." With a long list of hits such as "All Night Long," "Hello" and "Say You, Say Me," it easy to see why his music has remained at the forefront. His new album, "Tuskegee" (out March 26), is a long-overdue musical homecoming, a testament to his legacy and the timelessness of his appeal.

"I'm truly excited to be a part of 'Duets.' The format is unlike anything that's out there right now, and the opportunity to work with such talent, both the other artists and contestants, is definitely going to make for an exciting competition," Thicke said.

By the age of 16, Thicke was writing and producing songs for artists such as Brandy, Color Me Badd and Brian McKnight. By 21 he had written and produced songs on more than 20 Gold and Platinum albums, including for Michael Jackson, Marc Anthony, Pink and Christina Aguilera, among others. A year later he signed with Jimmy Iovine and Interscope records. It didn't take much time for Thicke to make "A Beautiful World," his critically acclaimed debut album released in 2003 under the name "Thicke." His breakthrough second release, 2006's "The Evolution of Robin Thicke," produced the mega hit "Lost Without U," which became the No. 1 most played song in Urban Adult Contemporary BDS and topped four Billboard charts simultaneously - No. 1 R&B/Hip-Hop album, No. 1 Hot R&B/Hip-Hop song, No. 1 Hot R&B/Hip-Hop Airplay and No. 1 Hot Adult/R&B Airplay. Thicke has established himself as one of the most respected singer-songwriters in soul and R&B music today, and has received some of the industry's top accolades, including the VH1 Soul/Vibe Award for Best Breakthrough Artist and nominations from BET, Soul Train, MTV VMA, MOBO, the American Music Awards and the ASCAP Song of the Year. Thicke's fifth studio album, "Love After War," was released on Dec. 6, 2011, to more critical acclaim. The album is Thicke at his most raw and honest yet.