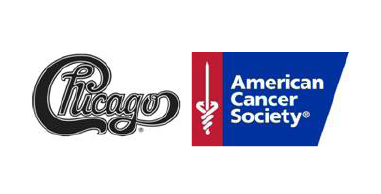 Chicago has teamed up with the American Cancer Society for the third year in a row to give fans a chance to bid to sing with the legendary "rock and roll band with horns" during its tour across the U.S. Fans across the country will be able to bid on a package that includes a meet-and-greet with Chicago, two premium tickets, backstage passes, and a special opportunity to sing the classic hit song "If You Leave Me Now" onstage with the band during the concert. Fans can bid in the auction at www.cancer.org/singwithchicago, and all proceeds directly benefit the American Cancer Society's fight against breast cancer.

In 2010, the band joined forces with the American Cancer Society, the Official Sponsor of Birthdays, to create "Sing With Chicago," a highly successful promotion that has raised more than $130,000 to fight breast cancer.

"The 'Sing With Chicago' promotion was such a great time for our fans, and contributed so much to the breast cancer cause, that we wanted to do it on our 2012 tour, too," said Peter Schivarelli, Chicago's manager. "We're doing it this year in honor of our friend, Paqui Kelly, the wife of Notre Dame's head football coach Brian Kelly, who is a breast cancer survivor."

"We so are pleased that Chicago is offering this amazing opportunity for the third straight year, and that the band remains dedicated to using their musical talents to help us create a world with less breast cancer and more birthdays," said Terry Music, chief mission officer for the American Cancer Society. "What an exciting way for our supporters to fight breast cancer and have a once-in-a-lifetime experience onstage with a legendary band."

This year's tour kicks off in the U.S. in Modesto, Calif., on March 7. For tour dates, visit www.chicagotheband.com. This summer, The Doobie Brothers, another one of America's treasured popular bands, will tour with Chicago in July and August. Previous winners were so moved by the experience that they launched the Facebook group "I Sang with Chicago", where they shared stories about their concerts, and videos of themselves on stage singing with the band. To see this public group, visit https://www.facebook.com/#!/groups/116983118321579.

Chicago is the first American rock band to chart Top 40 albums in five decades. In Billboard Magazine's recent list of Top 100 artists of all time, Chicago came in at No. 13, the highest charting American band. The line-up on tour will include original band members Robert Lamm on keyboards, vocals; Lee Loughnane on trumpet; James Pankow on trombone; and Walt Parazaider on woodwinds; as well as Jason Scheff on bass, vocals; Tris Imboden on drums; Keith Howland on guitar; Lou Pardini on keyboards, vocals; and Drew Hester on percussion.

Lifetime achievements include a Grammy Award, multiple American Music Awards, a star on the Hollywood Walk of Fame, a Chicago street dedicated in the band's honor, and keys to and proclamations from an impressive list of U.S. cities. Record sales top the 100,000,000 mark, and include 21 Top 10 singles, 5 consecutive No. 1 albums, 11 No. 1 singles and 5 Gold singles. An incredible 25 of the band's 33 albums have been certified platinum, and the band has a total of 47 gold and platinum awards. Chicago has generously supported other charitable causes in the past.

For the 17th straight year, Chicago has donated a portion of ticket sales to the Ara Parseghian Medical Research Foundation, which seeks a cure to the fatal children's disease, Niemann-Pick type C. The band also donates an additional portion of ticket sales to help raise money for Hannah & Friends, which works to improve the quality of life for children and adults with special needs. Hannah & Friends is the personal mission of Maura Weis and her husband, Charlie Weis, the current coach at the University of Kansas.

About the American Cancer Society

The American Cancer Society combines an unyielding passion with nearly a century of experience to save lives and end suffering from cancer. As a global grassroots force of more than 3 million volunteers, we fight for every birthday threatened by every cancer in every community. We save lives by helping people stay well by preventing cancer or detecting it early; helping people get well by being there for them during and after a cancer diagnosis; by finding cures through investment in groundbreaking discovery; and by fighting back by rallying lawmakers to pass laws to defeat cancer and by rallying communities worldwide to join the fight. As the nation's largest non-governmental investor in cancer research, contributing more than $3.4 billion, ACS turns what it knows about cancer into what it does. As a result, more than 11 million people in America who have had cancer and countless more who have avoided it will be celebrating birthdays this year. To learn more about ACS or to get help, call any time, day or night, at 1-800-227-2345 or visit cancer.org.