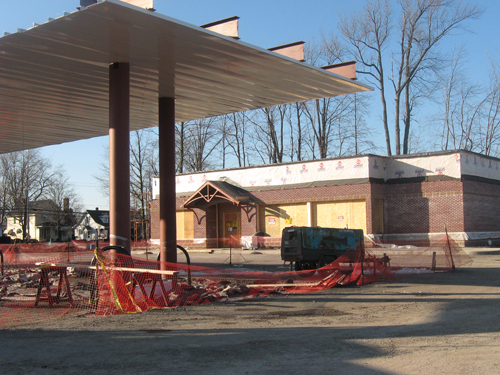 Calamar, Niagara County developer and general contractor, has announced the addition of Matty's to The Woodlands Corporate Center East.

Calamar Construction is currently building the new 4,000-square-foot convenience store and Sunoco gas station that will be prominently positioned at the entrance of The Woodlands Corporate Center East on Shawnee Road in Wheatfield.

The store represents the first retail component to be established in the mixed-use development owned and managed by Calamar. Matty's will include a deli making freshly prepared sandwiches and gourmet pizza as well as a drive-through coffee operator.

Both indoor and seasonal outdoor seating will be available for customers.

This 120-acre mixed use park is comprised of office, flex, medical, industrial, retail and residential and has achieved several milestones thus far, including developing and constructing the first office building in Niagara County in over 10 years; attracting global organizations such as Viatran Corp. and recently completed a $30 million capital investment developing and constructing 350 senior apartments and patio homes.

"The addition of Matty's to our park is very exciting" said Kenneth Franasiak, Calamar chairman and CEO. "It's the first of several planned retail developments and we believe it will service our park and neighboring community very well. Population trends for Wheatfield have increased substantially with one of the top growth rates in all of Western New York. It will be a genuine asset for all our commercial tenants, our three senior apartment communities within the park, the 30-plus patio homes and the community as a whole."

Construction is expected to be completed by late spring. Matty's and the coffee operator anticipate hiring approximately 10 people each.