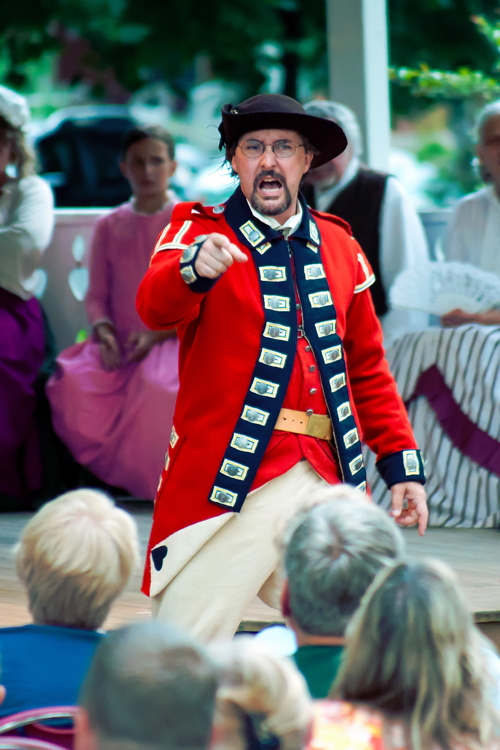 Matt Hake "attacks" an audience at a performance of "Spirits of 1812" in Lewiston last summer. (photo by Wayne Peters)

History takes the stage at N-W

The Sanborn Area Historical Society will offer "A Night of History" this Saturday, March 3, and they're doing it with a bang, featuring both the War of 1812 and the Civil War.

The shouting, tears, and, yes, laughter, begins at 7:30 p.m. at the Niagara-Wheatfield High School auditorium. Tickets, available at the door or by calling 731-5982, are $8 for adults, $7 for seniors and $5 for students.

First up will be a selection of characters from "Spirits of 1812" presented by the Lewiston Council on the Arts Marble Orchard Players. After an intermission with complimentary refreshments, find out about Clara Barton, the Civil War's "angel of the battlefield" and founder of the American Red Cross.

Much of the War of 1812 was played out right here along the Niagara River between the U.S. and Canada. Fort Niagara fell to the British and homes along the river, including the entire Village of Lewiston, were burned to the ground. The characters portrayed in "Spirits" were all local residents, including a congressman, a house-proud matron, a tavern keeper and a bereaved mother. There are also two people from the "other side."

Representing the British and Canadian factions are Matt Hake, who plays a British soldier, and Joanna Torreano as Sophia Shaw, the love interest of British Maj. Gen. Sir Isaac Brock. The tall monument to Brock, who died at the Battle of Queenston Heights, can easily be seen across the river from Lewiston.

Hake, a LaSalle resident and director of information technology for the Rural Health Education Center, confesses he was chosen for the part due to his ability to speak with a British accent (think Monty Python) and his ability to be sarcastic.

This is his first real acting gig, but "Spirits" audiences love his character's in-your-face attitude.

"I think he's homesick. He's defending British territory and feels the Americans are young, brash cowards," Hake said of his character. "I also think he understands that war is not an end all, be all, to solve a problem."

Hake said most people, even in this area, know very little about the War of 1812 and its local connection.

"I was probably just as ignorant as anybody coming into it the first time," he said, adding that his character has prompted him to research the military and strategic history of the war and even purchase the new Norah Perez book, "River Burning."

When audiences meet his British soldier, after meeting the American characters, Hake said, "for the first time, they sit back and realize there are two sides to every story."

Torreano might be portraying a Canadian, but in real life, she's a reading teacher at Niagara-Wheatfield's Colonial Village Elementary School. She's been in two plays at the Palace Theatre in Lockport, but this is her first monologue - "It's harder when you don't have another character responding to your comments."

Her portrayal of the woman who expected to become Brock's wife is bittersweet.

"Sophia Shaw both admired and loved Gen. Brock. She saw his good points and his bad points when she says, 'He could be as tough as nails, but as soft as a gentlemen.' I feel sorry that she wasn't able to spend more time with him and continue their journey of life together."

The performance at Niagara-Wheatfield for the Sanborn Area Historical Society is just one of many scheduled throughout the area for the "Spirits of 1812" during the bicentennial of the War of 1812.

"If you enjoy history, this performance will entertain and educate," Torreano said.

Move on to the Civil War and the second part of Saturday's program with the story of Clara Barton, portrayed by Denise Reichard, a Western New York speaker and performer who has been recreating the lives of great women in history since the 1980s. Reichard teaches speech communication and public speaking part time at Niagara County Community College.