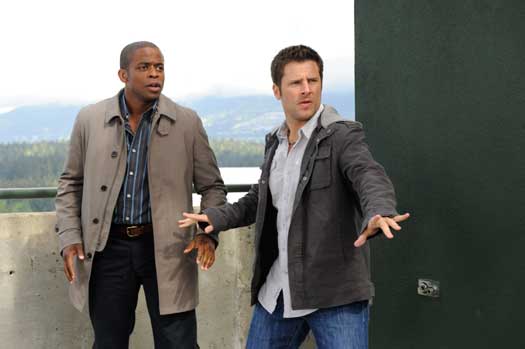 'Psych': 'The little show that could' becomes a big hit

What happens to "Psych" when "Monk" ends?

When Tony Shalhoub concluded his Emmy-winning turn as "defective detective" Adrian Monk in 2009, some wondered what would happen to its Friday night companion, "Psych."

"Monk" was not only the lead-in for "Psych," it was the USA Network's biggest hit series. "Psych," on the other hand, while funny and creative, was somewhat under-the-radar. It was more than possible "Psych" could suffer from a timeslot shift, a lesser lead-in, or general disinterest from those who kept the channel on after "Monk" ended each week.

In the two seasons since "Monk" wrapped, "Psych" has not only improved its ratings (and on Wednesday night, no less), it's made a concerted effort to engage "Psych-Os" via social media (2.2 million Facebook followers and counting), prize giveaways and in-person fan festivals.

As season 6.5 begins tonight (10 p.m., USA), the show has hit its stride - both creatively and in terms of audience appeal. Hill and Roday credit their team, their fans - and their "mentor" - for "Psych's" success.

"You know, creating a hit television show is - it's not easy, and it's - there's no perfect science to making it happen, so when it does, you just kind of enjoy the ride. I think for us to sit back and say - to attribute it to any one thing would be very presumptuous of us. ... It's just all these great things coming together, and people seem to enjoy it, and we have fun. I think nobody takes themselves too seriously, and I think that helps the process."

"And you mentioned 'Monk,' which was sort of a great shepherd for us, and you know, the truth is, 'Monk' managed to stick around long enough for us to kind of find our sea legs and get really comfortable doing what we were doing," Roday said. "So, by the time that they did call it a series for 'Monk,' we were sort of confident in our own skin and ready to spread our wings. So they kind of timed that out really nicely for us as well."

"I think also the support of the fans, especially like when we do our fan appreciation days, like we did our college (tour) and things like that, also, I think, allowed the studio and the network to see how much they enjoyed what we do, which also allows us to have more freedom to have more fun," Hill added.

"They enjoy being up (with us on set), and I think word has started to spread through the town that it's a fun place to come and work, and to give actors a chance to come and play something interesting and different and have a week in Vancouver where we get a chance to laugh - laugh a lot," Hill said.

Episodes in season 6.5 will include "Psych" takes on "Raiders of the Lost Ark," "The Shining" and reality television dating series.