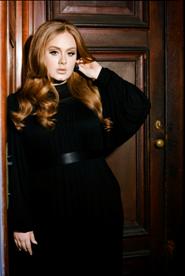 Adele to make much-anticipated return at the Grammy Awards

Current Grammy nominee Adele will make her much-anticipated return to live performances on The 54th Annual Grammy Awards. This will be her first time performing live anywhere in nearly five months since being forced to cancel a sold-out U.S. tour to undergo surgery on her vocal cords. "Music's Biggest Night," hosted by two-time Grammy winner and NCIS: Los Angeles star LL Cool J, takes place live from the STAPLES Center in Los Angeles, Sunday, Feb. 12 (8 to 11:30 p.m. live), on the CBS Television Network.

"I'm immensely proud to have been asked to perform at this year's Grammy Awards," Adele said. "It's an absolute honor to be included in such a night, and for it to be my first performance in months is very exciting and of course nerve-racking, but what a way to get back into it all."

Previously announced performers for the Grammys include Jason Aldean and Kelly Clarkson, Glen Campbell with The Band Perry and Blake Shelton, Coldplay and Rihanna, Foo Fighters, Bruno Mars, Paul McCartney, Nicki Minaj and Taylor Swift. Aldean, The Band Perry, Minaj and Shelton will perform on the broadcast for the first time, while Adele, Campbell, Clarkson, Coldplay, Foo Fighters, Mars, McCartney, Rihanna and Swift are returning to the Grammy stage.