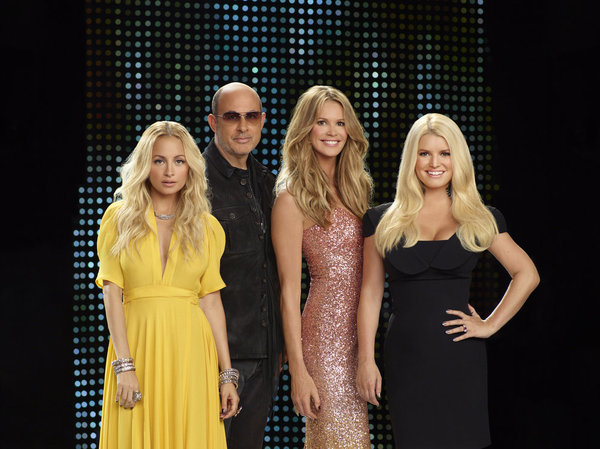 NBC's "Fashion Star" revealed this week the 14 designers competing to become America's next big fashion icon and a chance to win the multi-million dollar prize of launching their collections in three of America's largest retailers: Macy's, H&M and Saks Fifth Avenue.

The new series, hosted and executive-produced by Elle Macpherson, and featuring celebrity mentors Jessica Simpson, Nicole Richie and John Varvatos, will premiere on Tuesday, March 13 (9:30 to 11 p.m.), and resume with one-hour episodes on Tuesday, March 20 (10 p.m.).

The competing designers are:

Barbara Bates (Age: 55) -- Chicago -- A recent breast cancer survivor, Bates is a Chicago native and designer who has been working in the fashion industry for more than 25 years, knows what it means to be a fighter. In 1999, she founded the Bates Foundation, which provides custom prom attire/dresses for underprivileged young women and men from inner-city Chicago schools.

Edmond Newton (Age: 32) -- Atlanta -- From his junior high school days when he was voted "best dressed" to later becoming a professional male model at the age of 17, Newton has always been destined for a career in the fashion world. His ultimate dream is to create a successful fashion house and become a household name. @edmondnewton

Kara Laricks (Age: 38) -- New York City -- Former fourth-grade school teacher Laricks always told her students to be true to themselves. Finally, she took her own advice and pursued a career in fashion. She designs androgynous clothing for women, inspired by her love of menswear and an avant-garde Japanese design aesthetic. @karalaricks

Lisa Vian Hunter (Age: 47) -- Mercer Island, Wash. -- Women's wear designer Vian Hunter is a mother of two and lover of all things vintage. Hunter says that women are desperate for gorgeous, affordable clothing made in the USA -- and that's exactly what she intends to give them. @lisavianhunter

Lizzie Parker (Age: 41) -- Seattle --Parker has always made it a point to follow her dreams, even if it meant leaving something behind. That's exactly what she did when she left her corporate job in software development to pursue a career in fashion. Parker loves designing clothing that works for the everyday consumer, sizes 0-16, and creating a wardrobe that truly performs for today's modern, multifaceted woman.  @lizzie_parker

Luciana Scarabello (Age: 30) --Miami -- Born and raised in Argentina, Scarabello did not move to America until she attended college in Boston. Upon graduating, Scarabello went on to study at Parsons School of Design. She ultimately wants to see her dress collection expand into a line that includes separates. @l_scarabello

Nicholas Bowes (Age: 38) --Los Angeles --Born in Australia, Bowes began his career in fashion as a model in the mid-1990s but soon cultivated his fashion interests into a screen-printing business. This venture led to designing vintage tees and leather jackets and ultimately creating his own clothing line. Bowes hopes to become the next commercially viable brand. @nicholasbowes

Nikki Poulos (Age: 43) --Delray Beach, Fla. -- Poulos grew up on a farm with no electricity in the Australian Outback on 54,000 acres of land. With no television -- and only the outdoors to entertain her and her siblings -- they were forced to be creative. Poulos could not stay away from fashion and she is selling her clothing online and in stores across the U.S., the Caribbean and Australia. @nikkipoulos

Nzimiro Oputa (Age: 28) --New York -- A Detroit native and the youngest male of five siblings, Oputa was no stranger to hand-me-downs from his older brothers while growing up. The beginning of Oputa's fashion creativity was finding innovative way to transform his brother's old clothes into new designs. Oputa credits his upbringing for his creativity, and quit his job as an engineer to pursue his lifelong dream of a career in fashion." @nzimirooputa

Orly Shani (Age: 26) -- New York -- In high school, Shani was determined to emulate the clothes she loved in magazines and would spend a few dollars at local thrift stores and transform what she bought into masterpieces. This later became her first business venture. Shani, who specializes in convertible fashion, wants to build an empire, and with her strong entrepreneurial mindset and determination, nothing will stand in her way. @tucandwes

Oscar Fierro (Age: 37) -- Lewisville, Texas--Growing up in his poverty-stricken hometown in El Salvador only further fed the ambitious Fierro's desire to become successful. He is a thriving businessman who owns four assisted living facilities and has designed several clothing lines including couture dresses and a "To Go" line, which features women's wear for under $30. @theoscarfierro

Ronnie Escalante (Age: 32) -- San Francisco -- Raised in the Philippines, Escalante spent most of his days on an agricultural province. At the age of 17, Escalante and his family moved to the U.S. in search of a better life and soon after, he joined the U.S. Navy where he served for nine months. Keeping his chic and confident female consumers in mind, Escalante wants to keep the price point of his collection affordable. @escalanteronnie

Ross Bennett (Age: 27) -- Austin, Texas -- Raised in Texas, Bennett is a mixture of a big city kid and true country boy who likes to hunt, fish and design custom one-of-a kind dresses and other tailored items for women. Bennett studied under some of the most prestigious presidential tailors in the state. He currently has a dress shop in Austin, Texas, where he designs cocktail, formal, and wedding dresses, along with suiting and garments needed for everyday at the office.  @rbcollection

Sarah Parrott (Age: 31) -- Marietta, Ga. -- Parrott may be a newcomer to the fashion world, but she has always had a penchant for style. This stay-at-home mom decided to pursue her passion when she turned 30. She recently entered her first collection into the Charleston fashion week and won the People's Choice Award. With such a successful first showing, Parrott is an emerging designer to keep in sight. @sarahgparrott

In a weekly one-hour format, the 14 competing designers will participate in tasks, where they will be mentored by Simpson, Richie and Varvatos, designed to further develop and expand their brands.

At the end of each episode, America will have the chance to immediately purchase the winning designs showcased on the episode that week at Macy's, H&M and Saks Fifth Avenue. The winning designs will be available online immediately and in-stores the following day. With just a single trip down an extravagant runway, "Fashion Star" will change the lives and fortunes of these aspiring designers forever.

Caprice Willard (Macy's), Terron E. Schaefer (Saks Fifth Avenue) and Nicole Christie (H&M), who serve as the judges, will make on-the-spot decisions as they vie for the right to purchase and exclusively carry the work of the up-and-coming designers each week. The designers who do not sell any of their items to the buyers will be up for elimination. Simpson, Richie and Varvatos will be able to save one of these designers from the chopping block.

Additionally, viewers will have unprecedented, behind-the-scenes access to each designer on www.NBC.com's contestant blogs.