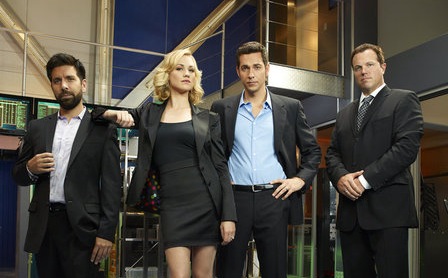 The Buy More is closing its doors for good.

NBC's "Chuck," a fan favorite for five seasons, is ending with what producer Chris Fedak calls an "epic finality" (8 and 9 p.m. tonight).

"It's going to be different than anything we've ever done before on the 'Chuck' show," he said. "We knew that we were building toward, you know, our final episode and we really wanted to put together something special.

"It's going to be a two-hour finale and the first part of it is called 'Chuck versus Sarah,' and the second part's called 'Chuck Versus the Good Bye' - and everything is at stake. You know, it's like all of our characters are at a crossroad, and it's going to be interesting to see how it all falls out. But it's definitely the biggest thing we've ever done on the 'Chuck' show."

"Chuck" centers on Buy More computer specialist Chuck Bartowski (Zachary Levi), a once mousy hacker who, in the course of almost 100 episodes, has gone from being a pretend spy with a jacked-up CIA implant in his head and handlers (read: babysitters) to being a real spy and, in fact, a real man.

His implant gone, Chuck and new wife Sarah (Yvonne Strahovski) were planning to start a family and leave the spy game when the dastardly Quinn (Angus MacFadyen) kidnapped him. Sarah, outgunned and looking to save the man she loves, implanted "The Intersect" into her mind to gain an upper hand.

Now, with two episodes remaining, "The Intersect" has gone haywire and erased Sarah's memory of Chuck. Oh, and Quinn, pretending to be CIA, has tasked Sarah with killing Chuck.

Chuck, best pal Morgan (Joshua Gomez), and Col. John Casey (Adam Baldwin) are in for one big surprise as they embark upon the show's final missions.

Can the effects of the implant be reversed? Will Chuck and Sarah live happily ever after?

"I think that the finale is definitely an answer to a lot of the character stories that we've been building for five seasons," Fedak said. "Everyone in this finale is going to be forced to make a decision in regard to what their future is going to hold and, you know, what have they learned over the past five seasons of the show. And so, the finale answers those questions. It's about where we're going to finally land with these characters and what they've discovered.

Baldwin says the show's longer-than-expected run was great fun for all involved.

"What I take away from 'Chuck,' first of all, a five-year run on any show these days is a true blessing and to have been able to go through it with people who are nice and creative and funny and hardworking and just lovable. I mean, we're gypsies really in this business - we're circus players - and we travel from town to town it seems like, and we travel from family to family on different projects. So to land on one for five years has been a joy and, you know, it's sad to see it go. But at least we have those five years together and we appreciated it while it was happening. So I just feel blessed and honored to have been a part of it," he said.

"This show was a lot of fun to make, but it was also an incredible challenge," Fedak said. "It must be one of the most difficult shows to do especially in the amount of time we have. And to do something that challenging to work with such a great team is really, you know, it's fantastic. To have worked with a great team like this is really one you're going to measure the rest of your career against."

"I don't and I haven't envied the work that writers have had to put in, you know?" Baldwin added. "They're locked in, basically in a cage, and having to figure out how we make this - how do we walk this tightrope - and for them to have (come) through week in and week out for us has just been - what a great reward."