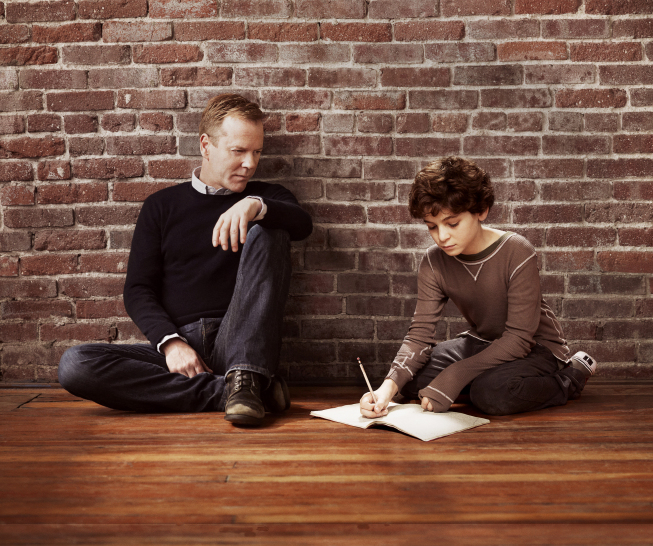 Kiefer Sutherland, right, returns to FOX as Martin Bohm, a widower and single father, haunted by an inability to connect to his 11-year-old son (David Mazouz). But everything changes when he discovers that his son possesses the gift of staggering genius - the ability to see things that no one else can and the patterns that connect seemingly unrelated events. "Touch" debuts with a special preview Wednesday, Jan. 25, on FOX. (photo ©2012 Fox Broadcasting Co./Credit: Brian Bowen Smith/FOX)

"Touch," the intriguing new drama series from Tim Kring ("Heroes"), and starring Kiefer Sutherland in his first television project since the Emmy-winning "24," will receive an unprecedented global launch for its March series premiere that includes coordinated worldwide distribution, marketing and advertising sponsorship. In a television first, Twentieth Century Fox Television Distribution, Fox Broadcasting Company, FOX One, 20th Century Fox Television and FOX International Channels are collaborating on a worldwide launch for the series, which will premiere nearly simultaneously in more than 100 countries.

To kick off the series' global marketing efforts, Sutherland will embark on an international media tour, stopping in several major cities across Europe and culminating in a global media event in New York City on March 18 - a date that figures prominently in "Touch's" pilot episode.

In another industry first, Unilever has come on board as the series' global advertising sponsor in a one-of-a-kind partnership designed to bring "Touch" to a worldwide audience.

Twentieth Century Fox Television Distribution has secured deals in more than 160 markets with some of the world's leading broadcasters and pan-regional platforms. The global launch will make the much-anticipated drama available on channels all around the world, including Global Television in Canada, Sky 1 in the United Kingdom, ProSieben in Germany, Yes TV in Israel and Channel One in Russia. FOX International Channels will launch the series in 64 countries throughout Latin America, Asia and Europe.

Unilever has partnered with the series to be its global sponsor in a first-of-its-kind worldwide collaboration. The key elements of Unilever's unprecedented marketing partnership include a media buy that covers Europe, Asia, Latin America as well as the U.S.; sponsorship of the "Touch" international media tour and worldwide premiere in New York City on March 18; and exclusive online content presented by Unilever brands around the world.

"Unilever is thrilled to be part of this inaugural global media sponsorship with News Corp.," said Luis Di-Como, Unilever's senior vice president of global media. "It's the very type of sponsorship that enables us to connect and engage consumers with one of our billion-euro global brands - Rexona, Degree in the U.S. and Sure in the UK - with one culturally relevant content platform."

"Our global Unilever partnership goes far beyond the scope of anything we've ever done," said Jean Rossi, president of FOX One, News Corp's integrated sales and marketing division, which worked with Unilever for more than a year to create the worldwide partnership. "Before moving forward, it was imperative that we find a property that conveyed our mutual strategic vision, and 'Touch' has the positive message and global appeal that articulates that spirit."

Marion Edwards, president of international television, Twentieth Century Fox Television Distribution, remarked, "It's so appropriate that a television series whose focus is the unity and connection we all share in spite of culture and language differences would serve as the springboard for this very exciting, global launch."

She added, "We are thrilled to share this special event with all our broadcast partners."

Blending science, spirituality and emotion, "Touch" will follow seemingly unrelated people all over the world whose lives affect each other in ways seen and unseen, known and unknown. At the story's center is Martin Bohm (Sutherland), a widower and single father, haunted by an inability to connect to his emotionally challenged 11-year-old son, Jake (David Mazouz). But everything changes after Martin learns that Jake possesses an extraordinary gift - the ability to perceive the seemingly hidden patterns that connect every life on the planet. Martin soon realizes that it's his job to decipher the numbers his son is obsessed with and recognize their meaning. As he puts the pieces together, he will help people across the world connect as their lives intersect according to the patterns Jake has foreseen, and his simple quest to connect with his son will shape humanity's destiny.