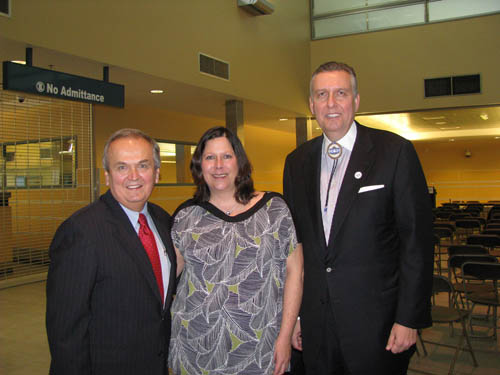 Shown at the Niagara Falls International Airport after the Jan. 12 press conference, from left, are State Sen. George Maziarz; Karen Karsten, chairman of the Seneca Gaming Corporation; and Robert Odawi Porter, president of the Seneca Nation of Indians. (photo by Susan Mikula Campbell)

At a press conference, State Sen. George Maziarz, R-C, Newfane, joined key boosters of the airport to announce the formation of the community group and a $1.1 million investment in its work by the Seneca Nation.

"We need to keep the rapid growth at the Niagara Falls airport on an upward trajectory," Maziarz said. "We have seen huge increases in passenger traffic in the past two years, but we have not yet reached our full potential. This new group of stakeholders will help chart our course forward, as the airport becomes an even bigger part of our region's economy."

To bolster the initial work of the stakeholders group, the Seneca Gaming Corporation is providing passenger incentives worth up to an estimated $1.1 million over a five-year agreement.

"Perhaps no project more clearly illustrates the shared benefits of the investments the Seneca Nation of Indians has made over the past decade than Niagara Falls International Airport," said Seneca Nation President Robert Odawi Porter, noting that the new terminal was partially funded by casino revenues. "The continued development of the airport as a transportation hub will benefit the local business and tourism community, in which we are an important player. This important initiative is another example of how the success and growth of the Seneca Nation and the success and growth of the local economy are inextricably tied."

"Building strong partnerships is something that Seneca Gaming Corporation believes in very strongly," added Karen Karsten, chairman of the company's board of directors. "Like any strong partnership, the partners in this initiative believe in the common good, that by working together, everyone can succeed. In the end, that will mean great things for Western New York."

The intent of the stakeholders group will be to augment and enhance current marketing efforts by the Niagara Frontier Transportation Authority, which owns and runs the airport and its state-of-the art passenger terminal that opened in December 2009.

Specifically, the new organization will focus on goals such as retaining and adding more carriers, developing incentive packages for tourists and businesses, building relationships with emerging markets for cargo service, foster growth at air-related properties near the terminal, and support the Niagara Falls Air Reserve Station.

"The development of the Niagara Falls International Airport is paramount to moving this region forward," said Assemblyman John Ceretto. "The formation of this stakeholders group is a major step in NFIA's transformation. This news follows on the heels of NFIA's award from the Regional Council and the regular addition of new commercial destinations and airlines. We are making progress and there is more to come."

Officers of the board of directors include: President - Sam Ferraro, commissioner of the Niagara County Department of Economic Development and executive director of the NCIDA; vice president - Cathy Walker, president and CEO of Seneca Gaming Corporation; secretary - Andrea Klyczek, director of marketing for the Niagara County IDA; and treasurer - Mary Whelan, general manager of Fashion Outlets-Niagara Falls USA.